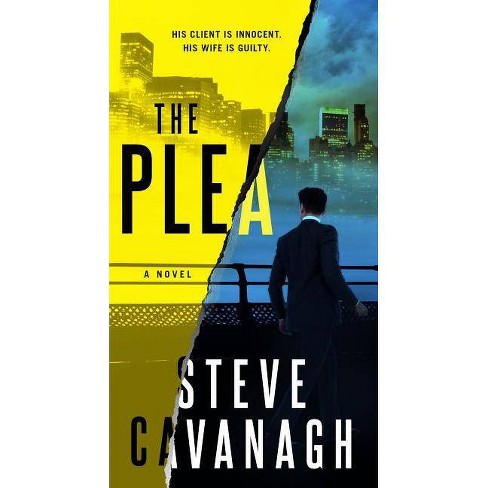 Eddie Flynn earned his law degree in the school of hard knocks. Now the con-artist-turned-criminal defense attorney from "The Defense" is about to take on his toughest case yet. "Rip-roaring legal thriller...Twisty, bloody, and convincing."--Ian Rankin. Tall Premium Edition.ooks.

"The Plea is one of the most purely entertaining books you'll read this year. It's a blast."
--John Connolly, bestselling author of the Charlie Parker novels

Eddie Flynn earned his law degree in the school of hard knocks. Now this con-artist-turned-criminal defense attorney is about to take on his toughest case yet.

Billionaire David Child swears he didn't murder his girlfriend, Clara--even if the evidence suggests otherwise. Home security video showed no intrusion. The murder weapon was in David's own car. He seems guilty as charged. So why won't he plead guilty?

Meanwhile, the FBI needs David's help in taking down a huge money laundering scheme. Now it's up to David's lawyer, Eddie, to get him to take a plea bargain. Otherwise the FBI will use incriminating files on Eddie's wife to send her to jail. Still, David insists that he didn't murder anyone. . .

As the FBI pressures Eddie to secure the guilty plea, Eddie becomes increasingly convinced that David is telling the truth. With adversaries threatening, Eddie has to find a way to prove David's innocence and find out if there's any way he might have been framed. But the stakes are high: Eddie's wife is in danger. And not just from the FBI...

"If you're a fan of John Grisham...you will be a fan of Steve Cavanagh." --Nelson DeMille, #1 New York Times bestselling author

"Nasty, vicious, ruthless. That's the way we like our legal mysteries, so The Plea fits the bill...The impressive legal maneuvering pays off in a centerpiece courtroom drama."
--New York Times Book Review

"A terrific new voice... Cavanagh's blend of courtroom twists and out-of-court action shakes up standard tropes and has real freshness...Cavanagh has a particular talent for escalating tension, and Eddie Flynn is a terrific creation well worth following. There are shades of Michael Connelly's Mickey Haller, but Flynn is also a unique character all his own. The Plea is a propulsive read that'll have you soldered to your seat as the pages whir by." --Mystery Scene

"Criminally entertaining...Perfect for anyone who likes a locked-room mystery wrapped inside a legal thriller on steroids." --Publishers Weekly, starred review

"As Cavanagh develops his plot, it's not clear who's conning whom... [The] setup produces some stunning moments, like a car chase directed by cell phone. Plus delicious locked-room and what-the-police-missed detection... The action sequences and the courtroom hijinks make this worth a look." --Booklist

"You can beat him up, arrest his wife, try to acid bomb him, but you can't hustle a hustler... Good courtroom sequences, engaging minor characters, an ornately twisted plot, a repentant but hopeful hero--what could go wrong?...A worthwhile caper." --Kirkus

"The Plea is one of the most purely entertaining books you'll read this year. It's a blast."
--John Connolly

"If you don't normally read courtroom dramas, you must make an exception. These books are just full of intelligent wheeling and dealing. Top notch storytelling... Superb, in a 'I must not move a muscle til I have finished this book' way." --Northern Crime

"Lively, clever and enjoyable . . . The constant action is interrupted only by absorbing courtroom scenes." --The Times (UK)

"The Plea reads like an idiosyncratic cross between Elmore Leonard and John Grisham, but bursts with its own individual flavour." --The Financial Times (UK)

Praise for Steve Cavanagh's Eddie Flynn series:
"Cavanagh's stellar debut provides everything a reader could ask for in a thriller--nail-biting suspense, a Russian nesting doll of a plot, and an original and compelling lead." --Publishers Weekly, starred review

"If you're a fan of John Grisham, Scott Turow, and Brad Meltzer, then you will be a fan of Steve Cavanagh's The Defense."
--Nelson DeMille, #1 New York Times bestselling author of Radiant Angel

"Smart and original. This is a belter of a book."
--Clare Mackintosh, bestselling author

Steve Cavanagh is an Irish author from Belfast and at the age eighteen he studied law by mistake. He is now the international award-winning author of the Eddie Flynn novels. His debut novel, The Defense, was nominated for the Ian Fleming Steel Dagger Award for Thriller of the Year, and The Plea won the Prix Polar Award for Best International Novel. Steve is still a practicing lawyer (someday he'll get the hang of it) and co-host of the chart-topping podcast Two Crime Writers And A Microphone. He has been involved in several high-profile civil rights cases, his Eddie Flynn novels have been published in over twenty countries, he's married with two young children, and in his spare time he is mostly asleep.
If the item details above aren’t accurate or complete, we want to know about it.

The Overnight Guest - by Heather Gudenkauf