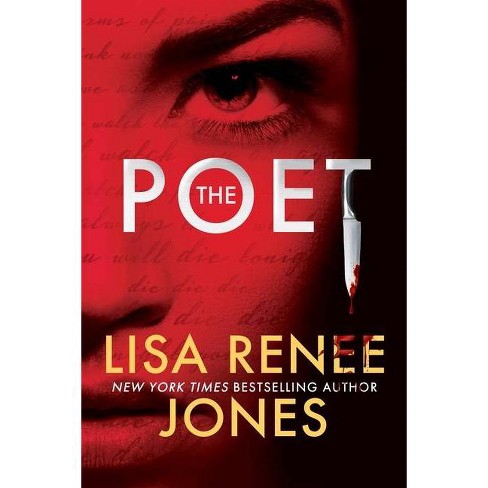 "Some call him friend or boss. Some call him husband or dad. Some call him son, even a favorite son. But the only title that matters to him is the one the media has given him: The Poet. A name he earned from the written words he leaves behind after he kills that are as dark and mysterious as the reason he chooses his victims. One word, two, three, a story in a poem, a secret that only Detective Samantha Jazz can solve. Because he's writing this story for her. She just doesn't know it yet."--Provided by publisher.

New York Times bestselling author Lisa Renee Jones delivers a gripping new thriller that will keep you on the edge of your seat until the very end.

A detective with a dark secret... Samantha Jazz used to be one of the top profilers in the Austin PD, living for the chase of hunting down a killer and bringing him to justice. That is, until one bad case nearly destroyed her. A killer with a hidden agenda... There's a new kind of serial killer on the loose--and people are turning up dead. The only clues to their murders lie in the riddles the killer leaves behind. A mystery with more questions than answers, and a suspicion that he's taunting Samantha.

A dead body wrapped in a riddle... Samantha will have to use all her wits to solve each new puzzle before the killer can strike again. But the closer she gets to the killer, the more she draws him to her as well. And in this thrilling game of cat and mouse--only one of them will survive.

New York Times and USA Today bestselling author Lisa Renee Jones writes dark, edgy fiction, including the LILAH LOVE thriller series and the highly acclaimed INSIDE OUT series, as well as many others successful titles. Prior to publishing, Lisa owned a multistate staffing agency that was recognized many times by the Austin Business Journal. In 1998, Lisa's was listed as the #7 growing women-owned business in Entrepreneur magazine. She lives in Colorado with her husband, a cat that talks too much, and a golden retriever who is afraid of trash bags. Lisa loves to hear from her readers. You can reach her on Twitter and Facebook daily.

lisareneejones.com
If the item details above aren’t accurate or complete, we want to know about it. Report incorrect product info.