The Poetry of Strangers - by Brian Sonia-Wallace (Paperback) 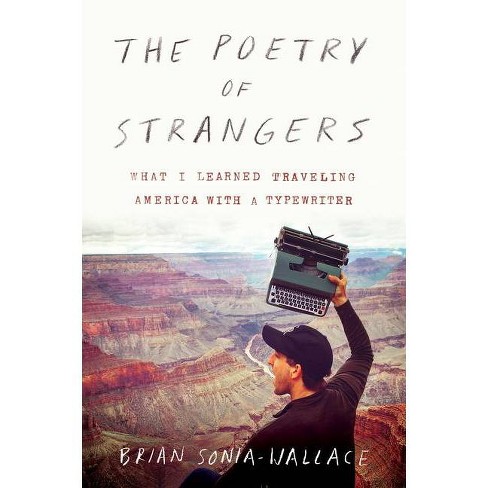 "Before he became an award-winning writer and poet, Brian Sonia-Wallace set up a typewriter on the street with a sign that said 'Poetry Store' and discovered something surprising: all over America, people want poems"--

It might surprise you who's a fan of poetry -- when it meets them where they are.

Before he became an award-winning writer and poet, Brian Sonia-Wallace set up a typewriter on the street with a sign that said "Poetry Store" and discovered something surprising: all over America, people want poems. An amateur busker at first, Brian asked countless strangers, "What do you need a poem about?" To his surprise, passersby opened up to share their deepest yearnings, loves, and heartbreaks. Hundreds of them. Then thousands. Around the nation, Brian's poetry crusade drew countless converts from all walks of life.

In The Poetry of Strangers, Brian tells the story of his cross-country journey in a series of heartfelt and insightful essays. From Minnesota to Tennessee, California to North Dakota, Brian discovered that people aren't so afraid of poetry when it's telling their stories. In "dying" towns flourish vibrant artistic spirits and fascinating American characters who often pass under the radar, from the Mall of America's mall walkers to retirees on Amtrak to self-proclaimed witches in Salem.

In a time of unprecedented loneliness and isolation, Brian's journey shows how art can be a vital bridge to community in surprising places. Conventional wisdom says Americans don't want to talk to each other, but according to this poet-for-hire, everyone is just dying to be heard.

Thought-provoking, moving, and eye-opening, The Poetry of Strangers is an unforgettable portrait of America told through the hidden longings of one person at a time, by one of our most important voices today. The fault lines and conflicts which divide us fall away when we remember to look, in every stranger, for poetry.

"Earnest and soulful....Readers will be heartened and inspired by Sonia-Wallace's artistic and spiritual coming of age." --Publishers Weekly

"I adore what Brian Sonia-Wallace is doing, and his voice in writing about poetry in human lives is endearing, smart, captivating, humane, compassionate--everything I wish our country were, every day." --Naomi Shihab Nye, New York Magazine Poetry Editor and the Young People's Poet Laureate of the Poetry Foundation, Chicago

Exploring America by road and rail, Brian Sonia-Wallace offers his presence to strangers, typing poems for them and, in turn, learning from them about sex, music, politics, religion, and magic. He peers past our consumerism and polarization to uncover the intimate desire of every one of us: to be heard, and to receive the gift of words.--Richard Polt, author of The Typewriter Revolution

While poetic verse is the common denominator of each essay, the theme that ties it all together is how similar we all are at the core... An enlightening project that exposes how alike we are in our differences. --Kirkus Reviews

In The Poetry of Strangers, Brian Sonia-Wallace jumps a train and goes "ridin' the rail, " listening, exchanging poems with the riders. Poems are no longer poems, they become a "private America," they blur from moments of imprisonment to open lines of freedom, "corazón" listening, and cross-border investigations to visceral notes on being from a "bad country." Is this book about poetry, strangers, liberation or the "shrapnel interactions" of minds, bodies and lands flaming towards humanity? A text we have been dreaming of - the act of empowering invisibilized peoples, literature and human beings in danger.--Juan Felipe Herrera, Poet Laureate of the United States, Emeritus
If the item details above aren’t accurate or complete, we want to know about it. Report incorrect product info.

Get it by Thu, May 27 with free Standard Shipping