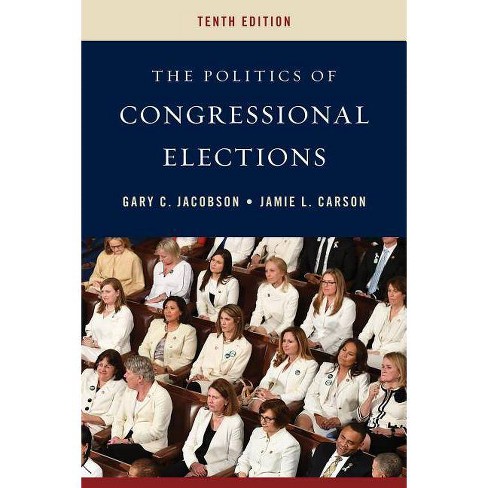 "Pairing historical data analysis and original research with fundamental concepts of representation and responsibility, The Politics of Congressional Elections presents students with the tools to evaluate representative government, as well as their own role in the electoral process"--

Jacobson and Carson provide students with a comprehensive introduction to congressional elections and the electoral process. The tenth edition offers an engaging examination of congressional candidates, campaigns, and elections by incorporating coverage of the most recent elections and the changing roles of voters, incumbents, challengers, and campaign contributions. It examines the first two years of the Trump presidency and its impact on the 2018 midterms with respect to the large number of female candidates running for office and the enormous amounts of money spent by challengers. This edition also highlights the referendum narrative underlying the election in response to behavior and events in the Trump administration. By pairing historical data analysis and original research with fundamental concepts of representation and responsibility, The Politics of Congressional Elections presents students with the tools to evaluate representative government, as well as their own role in the electoral process.

This is the most comprehensive and authoritative account of how congressional elections work. It is the book of record for anyone who wants to know how elections have changed over the past thirty years, and how elections can change the way congress operates.--Robert Boatwright, Clark University

This single volume contains all that a student would need to know to achieve a firm grasp of congressional elections... I would not adopt any title other than Jacobson's Politics of Congressional Elections. It is the best of the breed.--Ross K. Baker, Rutgers University

Gary C. Jacobson is Distinguished Emeritus Professor of Political Science at UCSD. His field of interest is American national politics, with a subfield focus on Congress and congressional elections. He is the author of Money in Congressional Elections; The Politics of Congressional Elections; and The Electoral Origins of Divided Government; and co-author of Strategy and Choice in Congressional Elections, American Parties in Decline, and The Logic of American Politics. His current research is on the electoral basis of partisan polarization in Congress. Jamie Carson is the UGA Athletic Association Professor of Public and International Affairs II in the Department of Political Science at the University of Georgia. His research interests include American politics and methods. He regularly teaches courses on the U.S. Congress, the presidency, the politics of congressional elections, and American political development. Recent books include (with Joel Sievert) Electoral Incentives in Congress (2018) and (with John Aldrich, Brad Gomez, and David W. Rohde) Change and Continuity in the 2016 and 2018 Elections (2020).
If the item details above aren’t accurate or complete, we want to know about it. Report incorrect product info.