The President's Book of Secrets - by David Priess (Paperback) 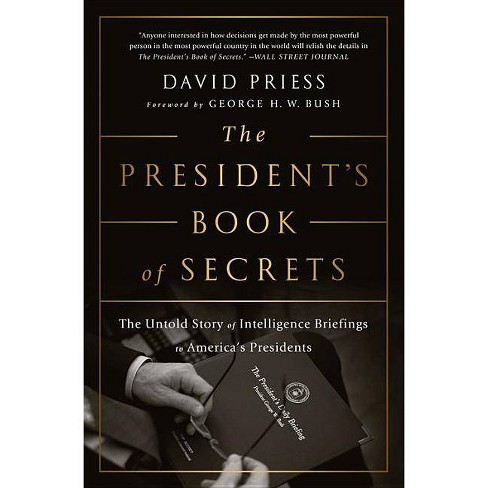 "Every day, a member of the CIA presents to the president a report detailing the most sensitive activities and analysis of world events. These can range from the behavior of America's allies to the maneuvering of its adversaries, from imminent dangers to long-term strategic opportunities ... This report--for the president's eyes only--forms the basis of the president's assessment of US intelligence and strength. The story of the President's Daily Brief--the PDB, in the jargon--is a window into the character of each president and his administration, and the degree to which his worldview and policy was shaped by the information from the security services"--

Every president has had a unique and complicated relationship with the intelligence community. While some have been coolly distant, even adversarial, others have found their intelligence agencies to be among the most valuable instruments of policy and power. Since John F. Kennedy's presidency, this relationship has been distilled into a personalized daily report: a short summary of what the intelligence apparatus considers the most crucial information for the president to know that day about global threats and opportunities. This top-secret document is known as the President's Daily Brief, or, within national security circles, simply the Book. Presidents have spent anywhere from a few moments (Richard Nixon) to a healthy part of their day (George W. Bush) consumed by its contents; some (Bill Clinton and George H. W. Bush) consider it far and away the most important document they saw on a regular basis while commander in chief. The details of most PDBs are highly classified, and will remain so for many years. But the process by which the intelligence community develops and presents the Book is a fascinating look into the operation of power at the highest levels. David Priess, a former intelligence officer and daily briefer, has interviewed every living president and vice president as well as more than one hundred others intimately involved with the production and delivery of the president's book of secrets. He offers an unprecedented window into the decision making of every president from Kennedy to Obama, with many character-rich stories revealed here for the first time.

[Priess] deftly sketches the evolution of this daily intelligence digest, along with the twists and turns of policy, personalities and power plays...Anyone interested in how decisions get made by the most powerful person in the most powerful country in the world will relish the details in The President's Book of Secrets.--Wall Street Journal

A fascinating look into the operation of power at the highest levels with many character-rich stories.--Kentucky Forward

A welcome change of pace from the traditional spy yarn or tell-all books that dominate the intelligence literature today. Priess' work makes an invaluable contribution to the study of intelligence, which no library on national security is complete without...Priess's prose is highly readable, fast paced, more interesting and even suspenseful than many readers might expect when given a story about analysts doing their work. Priess is an exceptional raconteur, and his style makes characters come alive on the page.--The Cipher Brief

An authoritative yet easily read book about an important part of the president's daily routine. [Priess] has successfully enlivened the work with myriad first-person accounts from former presidents down to the folks who have written the PDB articles. A CIA review of the manuscript ensured that classified material was not included, but Priess gives the reader plenty of substance to go with details of the process. As a result, The President's Book of Secrets offers a previously untold story about one of those closely guarded, 'eyes-only' facets of the intelligence world.--Michael K. Bohn, Tribune News Service

An important addition to the body of academic works on national security. It offers a unique look into the people and processes that impacted and continue to shape the course of history. In lifting the veil, Priess gives readers not just a close look at a key product that influences the choices of those in the White House, but the inner workings of government itself.--Proceedings

At times as entertaining as it is informative, Priess' book is neither a dry academic exercise nor a sensational tell-all expose, but is instead a thoughtful and revealing peek behind the scenes of what goes on between the President and the keepers of the nation's secrets.--Mark McLaughlin, DC Examiner

David Priess, a former CIA officer, has lifted the veil on the process and substance of creating the PDB in his readable and well-researched volume, The President's Book of Secrets...providing insights not only into modern American presidents and their approaches to working with intelligence products but also the attitudes of senior officials to the products. Those insights are an interesting addition to the historical record on U.S. foreign policy.--Jack Caravelli, The Washington Free Beacon

David Priess, a CIA officer who served as a daily intelligence briefer during the Clinton and George W. Bush administrations, has written a thoroughly engaging account of how 'The Book, ' as it is known in Agency parlance, came into existence, and how presidents used (or ignored) it.--The Washington Times

In The President's Book of Secrets, David Priess succeeds in lifting up the curtain on the personalities behind national security and how the government's leading analysts bend to those characters to fulfill their duty.--Charged Affair

This volume provides greater understanding of how presidents' minds operate and dissect information. It also humanizes their decisions by detailing the intricacies of how the PDB is handled. With the September 2015 release of the Kennedy and Lyndon Johnson PDBs, this publication is timely...Recommended for those interested in a different perspective on the U.S. presidency, political scientists, and historians.--Library Journal, starred review

Turns the potentially dour history of the president's daily intelligence briefing into a stimulating, if uncritical, account... Readers accustomed to CIA skullduggery will be surprised to find it admiringly portrayed as an organization of experts devoted to delivering unbiased information to a grateful president.--Publisher's Weekly

David Priess is author of the The President's Book of Secrets: The Untold Story of Intelligence Briefings to America's Presidents. He has a PhD in Political Science from Duke University and served at the CIA during the presidencies of Bill Clinton and George W. Bush as an intelligence officer, manager, and daily intelligence briefer and at the State Department. Priess writes, speaks, and appears often on broadcast media about the presidency and national security.
If the item details above aren’t accurate or complete, we want to know about it. Report incorrect product info.