The Problem of Democracy in the Age of Slavery - (Antislavery, Abolition, and the Atlantic World) 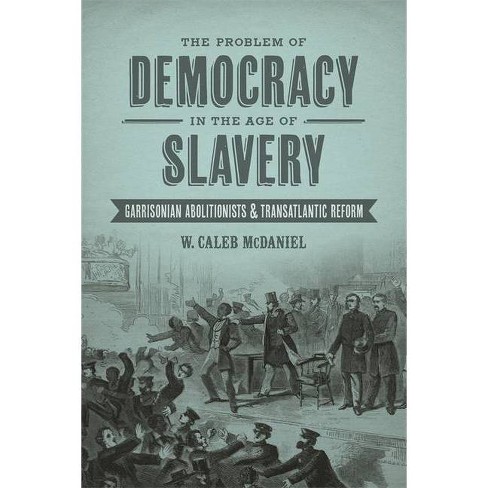 $38.49
0 out of 5 stars with 0 reviews
be the first!be the first! ratings
Shipping
Free standard shipping with RedCard
Help us improve this page

In The Problem of Democracy in the Age of Slavery, W. Caleb McDaniel sets forth a new interpretation of the Garrisonian abolitionists, stressing their deep ties to reformers and liberal thinkers in Great Britain and Europe. The group of American reformers known as "Garrisonians" included, at various times, some of the most significant and familiar figures in the history of the antebellum struggle over slavery: Wendell Phillips, Frederick Douglass, and William Lloyd Garrison himself. Between 1830 and 1870, American abolitionists led by Garrison developed extensive networks of friendship, correspondence, and intellectual exchange with a wide range of European reformers--Chartists, free trade advocates, Irish nationalists, and European revolutionaries. Garrison signaled the importance of these ties to his movement with the well-known cosmopolitan motto he printed on every issue of his famous newspaper, The Liberator: "Our Country is the World--Our Countrymen are All Mankind." That motto serves as an impetus for McDaniel's study, which shows that Garrison and his movement must be placed squarely within the context of transatlantic mid-nineteenth-century reform. Through exposure to contemporary European thinkers--such as Alexis de Tocqueville, Giuseppe Mazzini, and John Stuart Mill--Garrisonian abolitionists came to understand their own movement not only as an effort to mold public opinion about slavery but also as a measure to defend democracy in an Atlantic World still dominated by aristocracy and monarchy. While convinced that democracy offered the best form of government, Garrisonians recognized that the persistence of slavery in the United States revealed problems with the political system. They identified the participation of minority agitators as part of the process in a healthy democratic society. Ultimately, Garrisonians' transatlantic activities reveal their deep patriotism, their interest in using public opinion to affect American politics, and their similarities to other antislavery groups. By following Garrisonian abolitionists across the Atlantic Ocean and exhaustively documenting their international networks, McDaniel challenges many of the timeworn stereotypes that still cling to their movement. He argues for a new image of Garrison's band as politically savvy, intellectually sophisticated liberal reformers, who were well informed about transatlantic debates regarding the problem of democracy.-- "American Historical Review"
If the item details above aren’t accurate or complete, we want to know about it. Report incorrect product info.