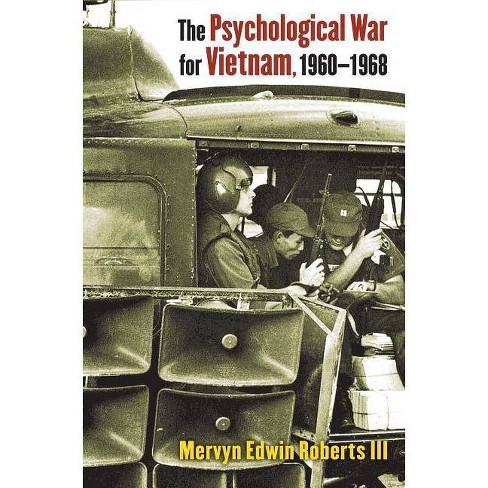 $31.99
no reviews yet
be the first!be the first! ratings
Shipping
Free standard shipping with RedCard
Loading, please wait...
Help us improve this page

"Roberts offers considerable insights into the United States' and the DRV's psychological warfare, which highlights the need to look beyond combat and gain a more complete appreciation of the range of ways in which Americans and Vietnamese fought over the fate of Southeast Asia."--American Historical Review

"Roberts has forged a new path in this in-depth examination of an oft-overlooked aspect of not just the Vietnam War but warfare in general."--Journal of American History

"This book is very well "Both revisionist and orthodox Vietnam War historians will benefit from Roberts' thorough and thoughtful analysis."--Journal of Interdisciplinary History

written and documented. Most importantly, it covers an overlooked part of one of the most contentious conflicts this nation experienced--the role of psychological operations and what the soldiers did to fight a determined and formidable enemy."--Special Warfare

"[This] well-written book is interesting on several levels because it addresses PSYOP during the Cold War and in the advisor years and the overwhelmingly American phase of the war in Vietnam. It possesses a depth of knowledge beyond the operational and tactical levels of application and is philosophical and intellectual in its understanding of how propaganda affects decision making. Roberts draws a valuable summary of lessons learned in his analysis of American PSYOP efforts in Vietnam."--Air Power History

"Roberts's book is a good primer on PSYOPs as he includes definitions of different types of propaganda and a short history of US use of psychological warfare before the Vietnam War."--Journal of Military History

"A comprehensive, well documented, multi-layered, and appropriately illustrated study of US psychological operations (PSYOPS) during the war in Vietnam. Roberts has done historians and students of the Vietnam War a great service by so persuasively clarifying why those efforts fell short."--Michigan War Studies Review

"This book is a must read for psychological operations and counterinsurgency stakeholders at policy and practitioner levels."--Military Review