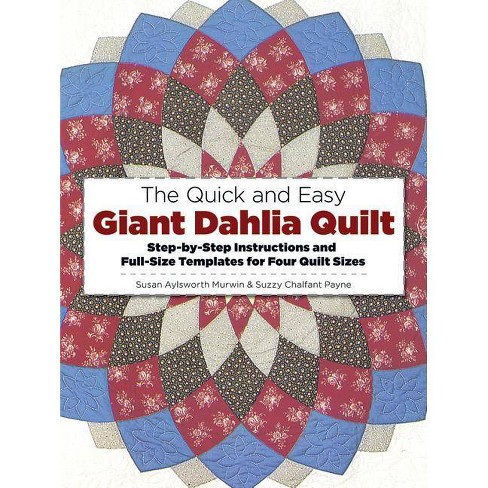 Formerly considered too difficult for anyone but the most experienced quilters, the classic Giant Dahlia pattern is now accessible to everyone, even beginners. Includes step-by-step instructions, 68 diagrams, and templates for four different-sized quilts.

Since its first known appearance in the 1935 issue of Needlecraft -- The Home Arts Magazine, the Giant Dahlia pattern has been a favorite among quilters. A beautiful patchwork representation of the dahlia flower, this classic quilt was often judged too difficult for anyone but the most experienced quilter. Noted quilting teachers and authors Susan Murwin and Suzzy Payne rediscovered the Giant Dahlia in the late 1970s and determined to make it accessible to quilters of every degree of skill. This book is the culmination of their efforts: they have solved the drafting and sewing problems of the pattern and its border, presenting a simplified procedure for making a Giant Dahlia quilt in clear, concise language and 68 diagrams.
In addition to complete step-by-step instructions for piecing a Giant Dahlia quilt on the sewing machine, there are accurate full-size templates for four different-sized quilts. The authors also provide templates for the unusual scalloped border design, as well as metric conversion, yardage, and color-plan charts. Quilters everywhere will appreciate this opportunity to craft a classic quilt that is elegant and elaborate in appearance as well as fun and easy to make.

Noted quilting teachers Susan Aylsworth Murwin and Suzzy Chalfant Payne are the co-authors of Creative American Quilting Inspired by the Bible and QuickandEasy Patchwork on the Sewing Machine.
If the item details above aren’t accurate or complete, we want to know about it. Report incorrect product info.