The Radical Element - by Jessica Spotswood 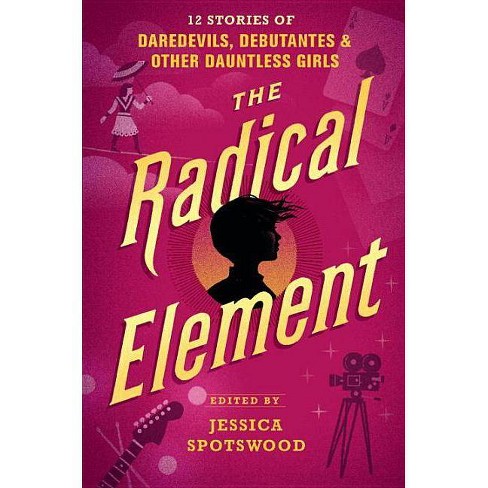 In an anthology of revolution and resistance, a sisterhood of YA writers shines a light on a century and a half of heroines on the margins and in the intersections. Contributors include Dahlia Adler, Erin Bowman, Sara Farizan, and Megan Shepherd.

In an anthology of revolution and resistance, a sisterhood of YA writers shines a light on a century and a half of heroines on the margins and in the intersections. To respect yourself, to love yourself, should not have to be a radical decision. And yet it remains as challenging for an American girl to make today as it was in 1927 on the steps of the Supreme Court. It's a decision that must be faced when you're balancing on the tightrope of neurodivergence, finding your way as a second-generation immigrant, or facing down American racism even while loving America. And it's the only decision when you've weighed society's expectations and found them wanting. In The Radical Element, twelve of the most talented writers working in young adult literature today tell the stories of girls of all colors and creeds standing up for themselves and their beliefs -- whether that means secretly learning Hebrew in early Savannah, using the family magic to pass as white in 1920s Hollywood, or singing in a feminist punk band in 1980s Boston. And they're asking you to join them. Original stories by:
Dahlia Adler
Erin Bowman
Dhonielle Clayton
Sara Farizan
Mackenzi Lee
Stacey Lee
Anna-Marie McLemore
Meg Medina
Marieke Nijkamp
Megan Shepherd
Jessica Spotswood
Sarvenaz Tash

These are tales across time and cultures, offering diverse women as witnesses to historical times. Contributor Dhonielle Clayton sums up the necessity of such an anthology when she writes, "There are few stories about what nonwhite people endured [during World War II], and I wanted to explore that." A needed collection to broaden understanding of the many different faces of history.
--Kirkus Reviews (starred review) Twelve stories from acclaimed YA authors focus on women who, one way or another, have radical, groundbreaking experiences...Short story collections can be uneven, but this one has an admirable goal, and there is plenty to love.
--Booklist Each story has an unique voice and tone, appealing to a variety of readers...This collection is extremely informative, intersectional, and inspirational, and will be sure to spark dialogue. Recommended for all young adult collections.
--School Library Journal Anna-Marie McLemore, Meg Medina, Dahlia Adler, Dhonielle Clayton, Sarvenaz Tash, Sara Farizan, Marieke Nijkamp, Erin Bowman, Stacey Lee, and Mackenzi Lee each tell a story of young female resistance and revolution in history. It's super timely and empowering, this is one you'll want to carry around in your tote bag.
--Bustle (blog) Perhaps this intriguing collection will encourage girls to embrace their best selves and to engage in radical actions of their own.
--Literacy Daily The 12 stories, set in the U.S., run chronologically from 1838 Savannah to 1984 Boston and spotlight girls from a range of ethnic and social backgrounds.
--Shelf Awareness for Readers With a focus on empowering girls and women to stand up for themselves and what is right, this title is definitely a needed entry in every collection.
--School Library Connection

Jessica Spotswood is the editor of A Tyranny of Petticoats, the companion volume to The Radical Element. She grew up near the Gettysburg battlefield, in Pennsylvania, but now lives in Washington, D.C., where she works for the District of Columbia Public Library system as a children's library associate.
If the item details above aren’t accurate or complete, we want to know about it. Report incorrect product info.