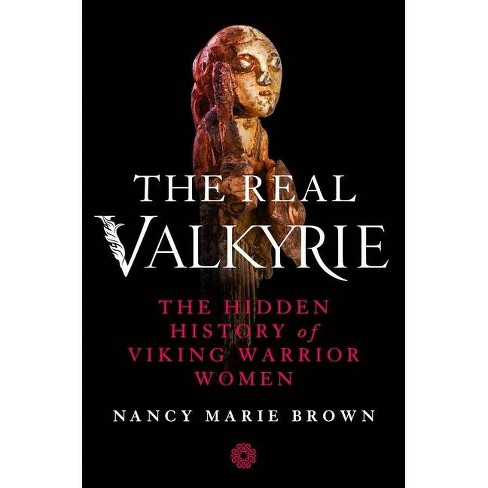 Nancy Marie Brown lays to rest the hoary myth that Viking society was ruled by men and celebrates the dramatic lives of female Viking warriors.

In the tradition of Stacy Schiff's Cleopatra, Brown lays to rest the hoary myth that Viking society was ruled by men and celebrates the dramatic lives of female Viking warriors

"Once again, Brown brings Viking history to vivid, unexpected life--and in the process, turns what we thought we knew about Norse culture on its head. Superb." --Scott Weidensaul, author of New York Times bestselling A World on the Wing Magnificent. It captured me from the very first page. --Pat Shipman, author of The Invaders In 2017, DNA tests revealed to the collective shock of many scholars that a Viking warrior in a high-status grave in Birka, Sweden was actually a woman. The Real Valkyrie weaves together archaeology, history, and literature to imagine her life and times, showing that Viking women had more power and agency than historians have imagined. Nancy Marie Brown uses science to link the Birka warrior, whom she names Hervor, to Viking trading towns and to their great trade route east to Byzantium and beyond. She imagines her life intersecting with larger-than-life but real women, including Queen Gunnhild Mother-of-Kings, the Viking leader known as The Red Girl, and Queen Olga of Kyiv. Hervor's short, dramatic life shows that much of what we have taken as truth about women in the Viking Age is based not on data, but on nineteenth-century Victorian biases. Rather than holding the household keys, Viking women in history, law, saga, poetry, and myth carry weapons. These women brag, "As heroes we were widely known--with keen spears we cut blood from bone." In this compelling narrative Brown brings the world of those valkyries and shield-maids to vivid life.

If you're intrigued by the cultural practices depicted in The Northman -- from women's weaving of intricate tapestries to funerals featuring bloody sacrifice -- you'll relish the details in this book. Brown also speculates, based on archaeological finds, that some women had more power in Viking society than The Northman suggests. --Seven Days (Vermont)

The royal warriors aren't what you think they are... a kingly read --Marco Eagle Combines archaeology, history, and literature... So cool --Book Riot Compelling... Brown brings the world of these Valkyries and shield-maidens to vivid life. --Naperville Magazine Stirring... passionate...undoubtedly entertaining... A fine lesson in Old Norse culture and history. --Kirkus Review This truly enjoyable and very well researched book is a must-read for anyone interested in Viking Age history and the history of women. --Michèle Hayeur Smith, Haffenreffer Museum of Anthropology, Brown University Brown introduces us to a broader version of the Viking world, and to many powerful Viking women who have been previously dismissed as fiction. The end result is a complex, important, and delightful addition to women's history. --Pamela D. Toler, author of Women Warriors: An Unexpected History An engaging read.. a much needed alternative retelling. The focus on the stories which are so often ignored makes it refreshing and thought provoking. --Marianne Moen, author of The Gendered Landscape: A Discussion on Gender, Status and Power In the Norwegian Viking Age Landscape

If you want books that are very readable, those by Nancy Marie Brown are highly recommended." --Medievalists.net

Engrossing... Brown engages the reader fully with her story-telling and with her unique point of view. She explores things others have not, to my knowledge, explored. --William Short, manager, Hurstwic, author of Viking Weapons and Combat Techniques This amazing book offers nothing less than a paradigm shift... Carefully researched and beautifully written, this journey into the distant past has a lot to offer for current discussions of gender bending, the instability of scholarly "facts", the dynamics of misogyny, and the legacy of slavery. --Gísli Pálsson, Professor Emeritus, University of Iceland, author of The Man Who Stole Himself

Magnificent. It captured me from the very first page. Brown manages to take the limited but startling information that one of richest graves of any Viking warrior ever discovered was that of a woman and paints a stunning tapestry of what life must have been like for a bold, brave woman in medieval times. Drawing upon her deep knowledge of Viking history, she creates an unforgettable character...I loved this book! --Pat Shipman, author of The Invaders

Nancy Marie Brown is the author of highly praised books of nonfiction, including Song of the Vikings and Ivory Vikings. They have been favorably reviewed in The New Yorker, The New York Times, The Economist, The Times Literary Supplement, The Wall Street Journal, and many other publications. Brown has spent decades studying Icelandic literature and culture. She lives on a farm in Vermont where she keeps four Icelandic horses and an Icelandic sheepdog.
If the item details above aren’t accurate or complete, we want to know about it. Report incorrect product info.