The Red Badge of Courage - by Stephen Crane (Paperback) 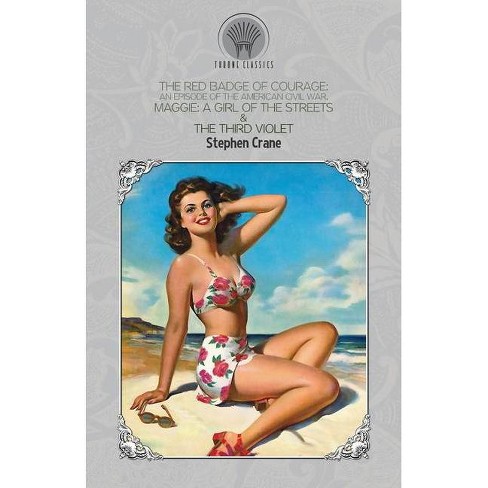 On a cold day, the fictional 304th New York Infantry Regiment awaits battle beside a river. Eighteen-year-old Private Henry Fleming, remembering his romantic reasons for enlisting as well as his mother's resulting protests, wonders whether he will remain brave in the face of fear or turn and run. He is comforted by one of his friends from home, Jim Conklin, who admits that he would run from battle if his fellow soldiers also fled. During the regiment's first battle, Confederate soldiers charge, but are repelled. The enemy quickly regroups and attacks again, this time forcing some of the unprepared Union soldiers to flee. Fearing the battle is a lost cause, Henry deserts his regiment. It is not until after he reaches the rear of the army that he overhears a general announcing the Union's victory.

Ashamed, Henry escapes into a nearby forest, where he discovers a decaying body in a peaceful clearing. In his distress, he hurriedly leaves the clearing and stumbles upon a group of injured men returning from battle. One member of the group, a "tattered soldier", asks Henry where he is wounded, but the youth dodges the question. Among the group is Jim Conklin, who has been shot in the side and is suffering delirium from blood loss. Jim eventually dies of his injury, defiantly resisting aid from his friend, and an enraged and helpless Henry runs from the wounded soldiers. He next joins a retreating column that is in disarray. In the ensuing panic, a man hits Henry on the head with his rifle, wounding him. Exhausted, hungry, thirsty, and now wounded, Henry decides to return to his regiment regardless of his shame. When he arrives at camp, the other soldiers believe his injury resulted from a grazing bullet during battle. The other men care for the youth, dressing his wound.

The story opens with Jimmie, at this point a young boy, trying by himself to fight a gang of boys from an opposing neighborhood. He is saved by his friend, Pete, and comes home to his sister, Maggie, his toddling brother, Tommie, his brutal and drunken father, and mother, Mary Johnson. The parents terrify the children until they are shuddering in the corner.

Years pass, Tommie and his father die as Jimmie hardens into a sneering, aggressive, cynical youth. He gets a job as a teamster, having no regard for anyone but firetrucks who would run him down. Maggie begins to work in a shirt factory, but her attempts to improve her life are undermined by her mother's drunken rages. Maggie begins to date Jimmie's friend Pete, who has a job as a bartender and seems a very fine fellow, convinced that he will help her escape the life she leads. He takes her to the theater and the museum. One night Jimmie and Mary accuse Maggie of "Goin to deh devil", essentially kicking her out of the tenement, throwing her lot in with Pete. Jimmie goes to Pete's bar and picks a fight with him (even though he himself has ruined other boys' sisters). As the neighbors continue to talk about Maggie, Jimmie and Mary decide to join them in badmouthing her instead of defending her.

Later, Nellie, a "woman of brilliance and audacity" convinces Pete to leave Maggie, whom she calls "a little pale thing with no spirit." Thus abandoned, Maggie tries to return home but is rejected by her mother and scorned by the entire tenement. In a later scene, a prostitute, implied to be Maggie, wanders the streets, moving into progressively worse neighborhoods until, reaching the river, she is followed by a grotesque and shabby man. The next scene shows Pete drinking in a saloon with six fashionable women "of brilliance and audacity." He passes out, whereupon one, possibly Nellie, takes his money. In the final chapter, Jimmie tells his mother that Maggie is dead. The mother exclaims, ironically, as the neighbors comfort her, "I'll forgive her!"