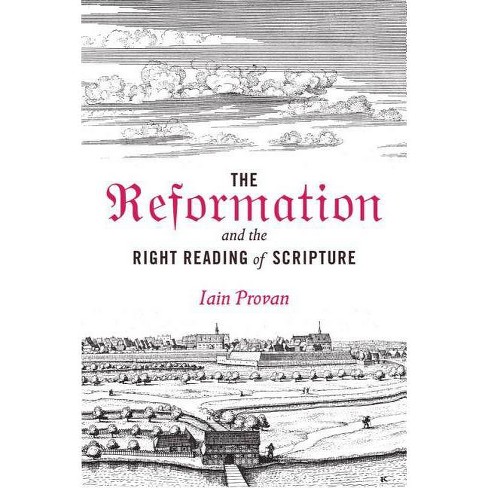 In 1517, Luther nailed his Ninety-Five Theses to the door of Wittenberg's castle church. Luther's seemingly inconsequential act ultimately launched the Reformation, a movement that forever transformed both the Church and Western culture. The repositioning of the Bible as beginning, middle, and end of Christian faith was crucial to the Reformation. Two words alone captured this emphasis on the Bible's divine inspiration, its abiding authority, and its clarity, efficacy, and sufficiency: sola scriptura.

In the five centuries since the Reformation, the confidence Luther and the Reformers placed in the Bible has slowly eroded. Enlightened modernity came to treat the Bible like any other text, subjecting it to a near endless array of historical-critical methods derived from the sciences and philosophy. The result is that in many quarters of Protestantism today the Bible as word has ceased to be the Word. In The Reformation and the Right Reading of Scripture, Iain Provan aims to restore a Reformation-like confidence in the Bible by recovering a Reformation-like reading strategy. To accomplish these aims Provan first acknowledges the value in the Church's precritical appropriation of the Bible and, then, in a chastened use of modern and postmodern critical methods. But Provan resolutely returns to the Reformers' affirmation of the centrality of the literal sense of the text, in the Bible's original languages, for a right-minded biblical interpretation. In the end the volume shows that it is possible to arrive at an approach to biblical interpretation for the twenty-first century that does not simply replicate the Protestant hermeneutics of the sixteenth, but stands in fundamental continuity with them. Such lavish attention to, and importance placed upon, a seriously literal interpretation of Scripture is appropriate to the Christian confession of the word as Word--the one God's Word for the one world.--Simon Burton "Expository Times"
If the item details above aren’t accurate or complete, we want to know about it. Report incorrect product info.