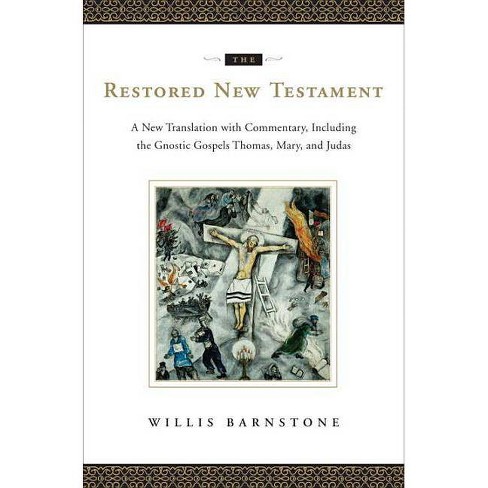 $37.99
no reviews yet
be the first!be the first! ratings
Shipping
Free standard shipping with RedCard
Loading, please wait...
Help us improve this page

"Barnstone's new English version of the core texts of Christian scripture is almost startling in its freshness. Scraping away many centuries of stylistic fussiness and supersessionist distortion, he gives us a set of Gospel narratives that are bold and direct in their simplicity and that show how steeped the first Christians were in the Jewish world from which they derived."--Robert Alter

"Willis Barnstone's The Restored New Testament is both an eloquent, fresh translation of the Four Gospels and of Revelation, and also a superb act of restoration, in which these Christian scriptures are returned to their Judaic origins and context. The introductory material is wise and poignant, and makes an authentic contribution to the common reader's understanding of the Gospels."--Harold Bloom

"Willis Barnstone's The Restored New Testament is breathtaking, new, astounding. It is a courageous, a daring book; but, by some magic, it appears not nouveau and experimental but deeply rooted and ancient. Did you think Jerome's or Tyndale's or James's 'Song of the Sparrows' from Matthew was thrilling? Look at Barnstone's. Or look at his version of Paul's heartbreaking lines of love in Corinthians 13. If Barnstone, through a long life of poetry, translation, story, and memoir, in language after language, had nothing else but this book, it would be a lifetime of extraordinary achievement. We are blessed by it."--Gerald Stern

"Much will always remain obscure about the humane and undogmatic rabbi Yeshua, who may or may not have aspired to be his people's prophesied Messiah. Indeed, there is no uncontested evidence that he ever lived. Nevertheless, he is the protagonist of narratives as powerful as The Iliad in their quite opposite spirit. What we learn from Willis Barnstone is that the gentle teacher who can still be discerned in those stories had little in common with the man-god whose cult, over two millennia, has licensed the persecution of Yeshua's own folk. The always amazing Barnstone has outdone even himself in this beautiful, scholarly, yet profoundly subversive book."--Frederick Crews
If the item details above aren’t accurate or complete, we want to know about it. Report incorrect product info.