The Resurrection of the Romanovs - by Greg King & Penny Wilson (Hardcover) 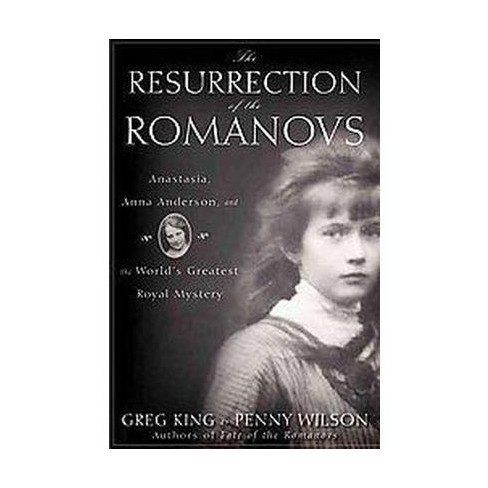 On the bitter-cold night of February 17, 1920, a distraught, physically battered, and psycologically damaged young woman stepped off of Berlin's Bedler Bridge and plunged into the icy waters of the Landwehr Canal. For nearly two years, this unknown girl, who carried no identification, refused to give her name to the doctors and nurses who cared for her after her failed suicide. When, finally, she broke her silence, she declared herself Grand Duchess Anastasia, daughter of Nicholas II of Russia. Thus began a cause celebre for thousands of displaced Russian aristocrats yearning for a past that would never return--and the most enduring mystery of the twentieth century.

In "The Resurrection fo the Romanovs, " the celebrated authors of "The Fate of the Romanovs" come together once again in order to reveal the truth behind the violent end of the Romanov Dynasty and the woman whose name is now forever linked to it.

Drawing on thirty years of research and thousands of pages of previously undiscovered or unpublished documents, Greg King and Penny Wilson penetrate the intriguing mythology that long surrounded the execution of Tsar Nicholas and his family to reveal the true fate of his youngest daughter. They mine interviews, investigations, and court proceeding to uncover the evidence for and against the claim of the woman who became known as Anna Anderson; to understand why so many people, including members of the imperial family, believed and endorsed her claim with such passion; and to find out who Anna Anderson really was and what motives lay behind her fraudulent claim. The answers they provide are frequently surprising and sometimes shocking.

For the first time, the authors document the extent of Anna Anderson's scars and other injuries, explain how she received them, and reveal the absence of wounds that several doctors claimed, under oath, to have seen. They also reveal the limitations of Anna's often-touted linguistic abilities and provide a critical analysis of the posthumous DNA tests that proved her an imposter. Adding to the drama is a disturbing account of the appalling confrontation between Anna Anderson, whose real name was Franziska Schanzkowska, and her birth family.

They offer a cogent analysis of the all-too-familiar role of the press in transforming the desperate claims of an emotionally disturbed woman into an international controversy and compelling insights into why so many people around the world wanted to believe that she was indeed Anastasia. Complete with eighty-five photographs, many never before published, "The Resurrection of the Romanovs" paints a startling and unforgettable psychological portrait of history's most memorable imposter.