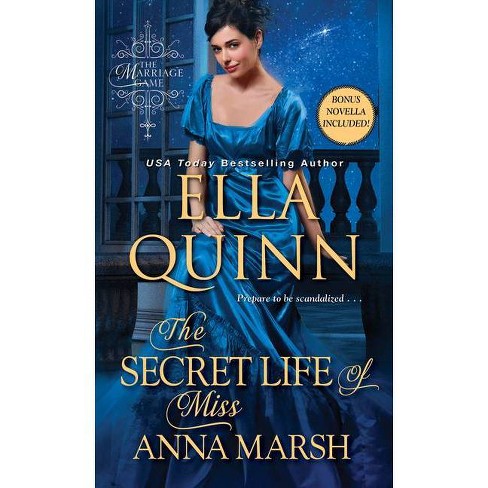 Madeleine's Christmas wish: "A French spy, Georges, Marquis Cruzy-le-Chãatel, has lived in England for years, sacrificing his life for his country--but not his heart. For he's never been able to forget his childhood friend, Madeleine. And now, in her hour of need, he is there to rescue her. . .The victim of a ruthless statesman, Madeleine, Comtesse du Beaune, has been abducted and sent to England to work in a brothel. Her greatest wish is to return home for Christmas, and her only hope of it is to marry Georges--though she will be his wife in name alone. Yet as they steal across the snowy countryside, Georges decides to woo her--with kisses that melt the winter's frost and leave her longing for a holiday miracle. . ."--FantasticFiction.com.

Now available in print for the first time, USA Today bestselling author Ella Quinn's second installment in The Marriage Game series is a witty, romantic historical tale about a young lady who must choose between her head and her heart... Since she was a young girl, Anna Marsh has dreamed of Sebastian, Baron Rutherford asking for her hand in marriage. But that was in another life when her brother Harry was alive, before she vowed to secretly continue the work he valiantly died for. Now as Sebastian finally courts Anna, she must thwart his advances. Were he to discover her secret, he would never deem her a suitable wife... Sebastian has always known Anna would become his wife someday. He expects few obstacles, but when she dissuades him at every turn he soon realizes there is much more to this intriguing woman. Somehow he must prove to her that they are meant to be together. But first he must unravel the seductive mystery that is Miss Anna Marsh...

Bestselling author Ella Quinn's studies and other jobs have always been on the serious side. Reading historical romances, especially Regencies, were her escape. Eventually her love of historical novels led her to start writing them. She has just finished her first series, The Marriage Game, and her new series, The Worthingtons, began in April 2016. She is married to her wonderful husband of over thirty years. They have a son and two beautiful granddaughters, and a dog. After living in the South Pacific, Central America, North Africa, England and Europe, she and her husband decided to make their dreams come true and are now living on a sailboat cruising the Caribbean and North America. Europe is next! Website: www.ellaquinnauthor.com
Facebook: www.facebook.com/EllaQuinnAuthor
Twitter: www.twitter.com/ellaquinnauthor
Blog: http: //ellaquinnauthor.wordpresscom
If the item details above aren’t accurate or complete, we want to know about it.

The Path to Sunshine Cove - by Raeanne Thayne (Hardcover)