The Selected Works of Abdullah the Cossack - by Hm Naqvi (Paperback) 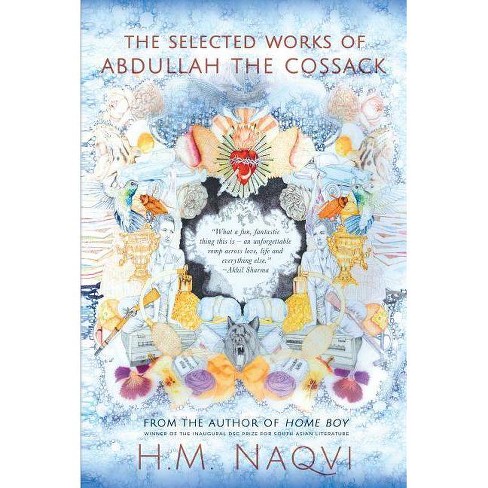 $10.99
MSRP$16.00
no reviews yet
be the first!be the first! ratings
Shipping
Free standard shipping with RedCard
Loading, please wait...
Help us improve this page

Praise for The Selected Works of Abdullah the Cossack

"The great Pakistani city of Karachi, says the titular narrator of H.M. Naqvi's The Selected Works of Abdullah the Cossack, was once a cultural mecca . . .That boisterous entrepot is long since gone . . . yet it survives in the memory of the novel's aging hero, and in this delirious love letter to the Karachi that was . . . Thrust into wheezing, hobbling action, Abdullah protects his friends and confronts his adversaries with a boldness and verbosity that is one part Don Quixote and one part Ignatius J. Reilly."--Sam Sacks, Wall Street Journal

"Naqvi's second novel (after Homeboy) is an uproariously funny, poignant family saga told by a glib septuagenarian contemplating life in his beloved city of Karachi....Touching on the metaphysical, the moral, and the absurd, this bawdy epic is a fresh-voiced testament to place, family, and the importance of loyalty."--Publishers Weekly, starred review

"Naqvi here delivers his promised 'big, bad comic epic.' This exhuberant account, featuring a protagonist as unlikely as he is appealing, is a true pleasure for its language and discourses on life, death, and what's in between."--Booklist, starred review

"A love story, a caper, a family dust-up, a farce--prizewinning Pakistani writer Naqvi's second novel offers all these things, yet they matter less than its lovingly evoked milieu, the uniquely vibrant neighborhoods and characters, culture, history, architecture, and aromas of the city. Infused with the spirit of Tristram Shandy, a sophisticated shaggy dog story for those happy to take the slow road and its many detours."--Kirkus Reviews

"A guide, a gourmand, an impassioned septuagenarian full to bursting with a love of jazz, poetry, history, his beloved hometown--H.M. Naqvi's remarkable Cossack is the Pakistani Falstaff, the Tristram Shandy of "Currachee," spinning yarns inside yarns, allusive, affirming, and grandly comic. But The Selected Works also asks: what might an old man owe a brother, a lover, a ward? And in answering that, becomes moving." --Joshua Ferris

"Wild, wise, and tender, The Selected Works of Abdullah the Cossack is like nothing you've read before yet somehow echoes as intimately as the voices of your own soul. Every page in this book is a playground, and each sentence an absolute thrill and joy to read."--Patricia Engel

"What a fun, fantastic, original thing this is."--Akhil Sharma

"Once a decade a voice emerges in English that performs a vernacular sonic boom: hearing it on the page, you instantly realize people had been speaking this way for a while, the novel just had not caught up. It happened with Salman Rushdie's Midnight's Children and Peter Carey's Illywacker and with Zadie Smith's White Teeth, Junot Diaz's Brief Wondrous Life of Oscar Wao, and Chimamanda Adichie's Americanah. With this noisy, rambunctious, hilarious novel, HM Naqvi joins their ranks. He has brought a brand new sound into the novel in English. It is riveting and robust, unlike anything I've ever read. You can almost hear sound waves clap hands in gratitude as the novel catches up with the world again."--John Freeman

"H.M. Naqvi is a superb stylist and writes like a poet. With careful attention to details and with enormous patience he presents a world that is at once fascinating and familiar. The Selected Works of Abdullah the Cossack is completely original in form and sensibility."--Ha Jin

"Smart and sorrowful . . . Naqvi is a former slam poet, and his exuberant sentences burst with the rhythms and driving power of that form while steering clear of bombast. Home Boy is a remarkably engaging novel that delights as it disturbs."--Joseph Salvatore, New York Times Book Review

"Narrated with great verve . . . In the wake of 9/11, three young friends--flamboyant, confident, swaggering--embark on an innocent, high-spirited caper . . . A deft exploration of 'otherness.'"--Moni Mohsin, Guardian, "Top 10 novels about Pakistan"

"A slam-dunk . . . An authentic and honest portrayal of what it's like to be a Muslim living in post-9/11 America."--Carol Memmott, USA Today

"Home Boy is a superior contribution to the genre, its compassionate humor saving if rom easy judgment. Naqvi's prose is evocative of Nabokov in its immense energy."--Anis Shivani, Huffington Post, "10 best books of 2009"

"You've read one or two before: a novel about young people coming of age or finding their way in Manhattan. This first novel, however, is like none you will have ever encountered . . . A tale that is colorfully detailed, funny in places, sad in others, frightening in still others. His characters come to life in away that lets us like them for their antics and quirks and, just below the surface, their humanity."--Peter Hannaford, Washington Times

"One of the funniest books of the year . . . The voice in the novel is exceptionally energetic, recalling Nabokov."--Anis Shivani, Brooklyn Rail

"A genius with words . . . I haven't read anything so delicious in a long time."--Mohammed Hanif

"Viciously hilarious, Home Boy bursts with intelligence and energy and pathos. I haven't read anything like it."--Gary Shteyngart

"A genre-busting, page-turning debut, Home Boy fuses street slang and literary discourse, pop culture and politics, history and comedy, East and West. Ultimately, though, Home Boy is a thoughtful story about a boy who become a man in these fraught and frightening times."--John Wray

"A marvelous literary achievement shaped by a refreshingly humane, irresistibly cool, and distinctly curried sensibility. From the word go, Home Boy is populated by larger-than-life characters and big ideas. It will make you think, laugh out loud, possibly cry, and at times dance with joy. You won't even notice that H. M. Naqvi has redefined South Asian literature."--Lee Siegel