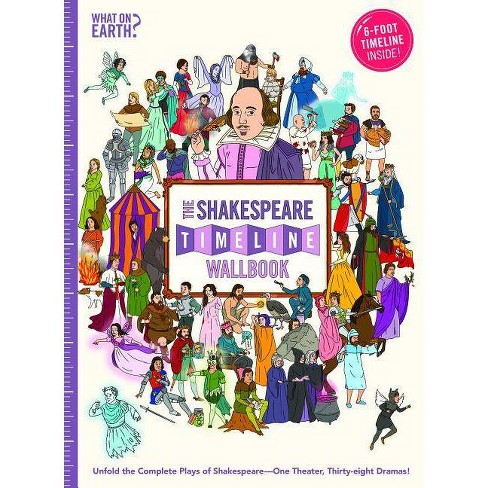 "A six-foot foldout illustrated timeline that summarizes William Shakespeare's oeuvre in the tiniest possible print; fortunately, a magnifying sheet is included. The book is a facsimile of a newspaper covering all things Shakespeare: his death, famous performances, preservation of Shakespearean sites and materials, films, and historical references and analyses. Also offered are fun facts, sonnets, a quiz, and a faux newspaper classified section. While the tone is light and occasionally a bit arch, a significant amount of historical data is presented. In addition, students will pore over the graphic novel--like illustrations. An additional purchase for collections where Shakespeare is in high demand." - School Library Journal

"This foldout book expands to create a six-foot-long removable timeline of Shakespeare's life, featuring panels devoted to his plays. Cartoon figures, drawn in a clear-line style, appear in key dramatic scenes, accompanied by quotations and summaries that readers can examine through an included magnification sheet (on its own, the font used for the recaps and context is almost comically small). Supplementing the timeline and its miniature theatrical stagings is the "Wallbook Chronicle," which is designed to look like a broadsheet newspaper filled with fictitious Shakespeare-related stories ("Stars crossed as West Side lovers take a tragic turn," reads the headline for a faux review of West Side Story). A selection of sonnets, letters to the editor from across the centuries, and a quiz round out this engaging resource for readers just getting to know Shakespeare and his work. Ages 6-14." - Publishers Weekly

Thanks to its uncommon format, this What on Earth? Wallbook is a tremendously engaging resource on a well-covered topic: the collected works of William Shakespeare. A foldout six-foot time line shows illustrated stagings of 38 plays, from The Two Gentlemen of Verona to Henry VIII. The basic plot and description of characters from each play share space with its most famous quotes. The second part of the book is formatted as a series of newspaper front pages, dating from 1616 through 2015, that chronicle the legacy of the Bard, including the adoption of his vernacular into the common lexicon, space orbs named after his characters, and the quest to rebuild a faithful rendition of the Globe Theatre. Shakespeare trivia and selected sonnets fill the end matter. Engrossing and packed with information, this interactive book will capture fresh interest for the world's most beloved playwright." - Booklist

"The thirty-eight plays of William Shakespeare that are featured in The Shakespeare Timeline Wallbook are presented as masterpieces simultaneously performed in front of children ages 6 to 14 on a 6-foot fold-out timeline set in the iconic Globe Theatre. Kids in grades 1 through 9 can spot the ghosts, hunt for the murderers, discover the poison, and revel in Elizabethan romance as each play unfolds. Concise plot summaries, key textual quotes, and carefully illustrated scenes help pinpoint the action. The timeline also features essential moments in Shakespeare's life providing a unique narrative context to the works of the world's favorite bard. The Shakespeare Timeline Wallbook also includes an easy-to-read chronicle that reports on more than forty seminal moments from the timeline in the style of a newspaper. Other features include a page of letters to the editor, a fifty-question quiz, and pocket magnifier. Developed in partnership with the Shakespeare Birthplace Trust, The Shakespeare Timeline Wallbook is unreservedly recommended and certain to be an enduringly popular addition to family, school, and community library collections." - Children's Bookwatch, Reviewer's Choice