The Shattered Realm of Ardor Benn - (Kingdom of Grit, 2) by Tyler Whitesides (Paperback) 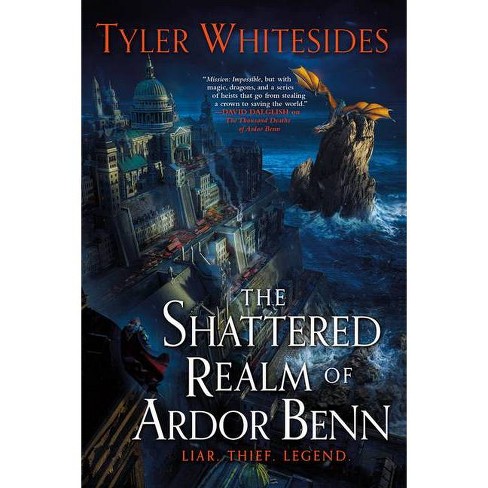 The enjoyable blend of intrigue, lighthearted escapades, and thrilling action brilliantly sets the stage for the series' conclusion. Readers will be thrilled. (Publishers Weekly)
The second in an action-packed epic fantasy series: In a world with dragon-fueled magic, master con artist Ardor Benn must infiltrate a centuries-old secret organization to find a missing royal heir.
Ardor Benn saved civilization from imminent destruction, but his efforts brought war to the kingdom. It is believed that the rightful rulers have all been assassinated. However, a young heir might have survived.
An ancient organization known as The Realm is behind the chaos, working from the shadows. Under the anonymity of masks, information is distributed sparingly.
Ard's been hired to infiltrate them, but he's got competition from an old friend. One who's set to prove she's better than the self-proclaimed Ruse Artist Extraordinaire.
If Ard can't find the heir then his world may again approach ruin. Stopping the complete and utter collapse of civilization is quickly becoming Ard's specialty.
Kingdom of Grit: The Thousand Deaths of Ardor BennThe Shattered Realm of Ardor BennThe Last Lies of Ardor Benn

Mission Impossible, but with magic, dragons, and a series of heists that go from stealing a crown to saving the world. A fun, terrific read I heartily recommend.--David Dalglish, author of A Dance of Cloaks, on The Thousand Deaths of Ardor Benn

"A truly grand scheme with complicated layers of plotting and trickery."--Booklist

A cracking introduction to a new fantasy world that demands further exploration.--SFX on The Thousand Deaths of Ardor Benn

Ardor is a rogue with a heart of gold and his team is incredibly fun to follow, but we also love this one of the originality of its heist.--B&N Sci-Fi and Fantasy Blog on The Thousand Deaths of Ardor Benn

I cannot recommend this book highly enough. It is easily the best fantasy-heist book I have read in years!--A Fantastical Librarian on The Thousand Deaths of Ardor Benn

The world of Ardor Benn is fascinating, deep, and well written ... This is a very impressive debut and Tyler Whitesides is clearly a talented writer with a lot of potential.--The Quill to Live on The Thousand Deaths of Ardor Benn

Whitesides makes his vibrant world easily accessible for newcomers, and the enjoyable blend of intrigue, lighthearted escapades, and thrilling action brilliantly sets the stage for the series' conclusion. Readers will be thrilled.--Publishers Weekly

When he's not writing, Tyler Whitesides enjoys playing percussion, hiking, fly fishing, cooking, and theater. Tyler is a bestselling children's author. He lives in the mountains of northern Utah with his wife and son.
If the item details above aren’t accurate or complete, we want to know about it. Report incorrect product info.