The Shift - by Russell A Carleton (Paperback) 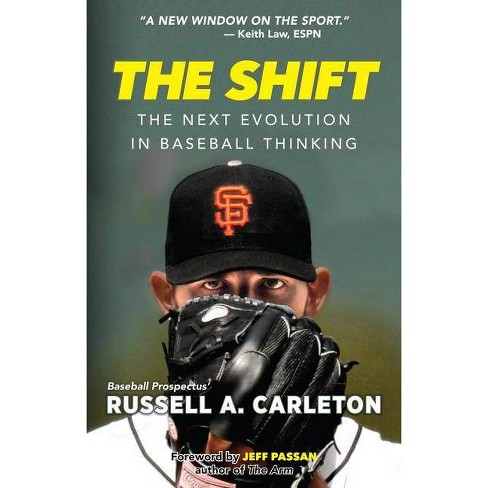 "Positioned at the crossroads of sabermetrics and cognitive science are questions that will alter the trajectory of both traditional and analytics-based baseball thinking. With a background in clinical psychology as well as experience in major league front offices, Baseball Prospectus' Russell Carleton illuminates advanced statistics and challenges cultural assumptions, demonstrating along the way that data and logic need not be at odds with the human element of baseball--in fact, they're inextricably intertwined"--

With its three-hour-long contests, 162-game seasons, and countless measurable variables, baseball is a sport which lends itself to self-reflection and obsessive analysis. It's a thinking game. It's also a shifting game. Nowhere is this more evident than in the statistical revolution which has swept through the pastime in recent years, bringing metrics like WAR, OPS, and BABIP into front offices and living rooms alike. So what's on the horizon for a game that is constantly evolving? Positioned at the crossroads of sabermetrics and cognitive science, The Shift alters the trajectory of both traditional and analytics-based baseball thought. With a background in clinical psychology as well as experience in major league front offices, Baseball Prospectus' Russell Carleton illuminates advanced statistics and challenges cultural assumptions, demonstrating along the way that data and logic need not be at odds with the human elements of baseball--in fact, they're inextricably intertwined. Covering topics ranging from infield shifts to paradigm shifts, Carleton writes with verve, honesty, and an engaging style, inviting all those who love the game to examine it deeply and maybe a little differently. Data becomes digestible; intangibles are rendered not only accessible, but quantifiable. Casual fans and statheads alike will not want to miss this compelling meditation on what makes baseball tick.

"Nearly 15 years post-Moneyball, baseball continues to change; the major league industry continues to have access to more data and more science. More and more conventional practices are being challenged. In many ways change is accelerating, and the way we understand and think about the game must also evolve. There is no one better to tell this story than Russell Carleton, who is not only one of the preeminent writers and analysts in the game at Baseball Prospectus, but who also worked inside an MLB front office and in the field of clinical psychology, which is becoming of greater interest to clubs. The Shift is a riveting read and an important baseball book." --Travis Sawchik, FanGraphs, author, Big Data Baseball: Math, Miracles, and the End of a 20-Year Losing Streak

"Russell Carleton is one of the industry's sharpest and most creative analysts, and watching him think through a puzzling baseball question is as much fun as watching Mike Trout battle an ace pitcher. There is no person involved in baseball--from the fan to the manager, from the field to the front office--who won't learn from this entertaining book." --Sam Miller, ESPN, co-author, The Only Rule Is It Has to Work

"What Daniel Kahneman did for behavioral economics, Russell Carleton has now done for baseball, opening up a new window on the sport, looking at it through a new lens while making it accessible to the lay reader." --Keith Law, ESPN, author, Smart Baseball: The Story Behind the Old Stats That Are Ruining the Game, the New Ones That Are Running It, and the Right Way to Think About Baseball

Russell Carleton is a baseball writer, researcher, and fan, living in Atlanta. He has been a regular contributor to Baseball Prospectus since 2009, writing about advanced statistical analysis in baseball, with an emphasis on the gory mathematical details. He holds a Ph.D. in clinical psychology from DePaul University in Chicago, and has provided statistical consultation to several teams in Major League Baseball. Jeff Passan is a baseball columnist at Yahoo! Sports and author of the New York Times Bestseller The Arm: Inside the Billion-Dollar Mystery of the Most Valuable Commodity in Sports.
If the item details above aren’t accurate or complete, we want to know about it. Report incorrect product info.