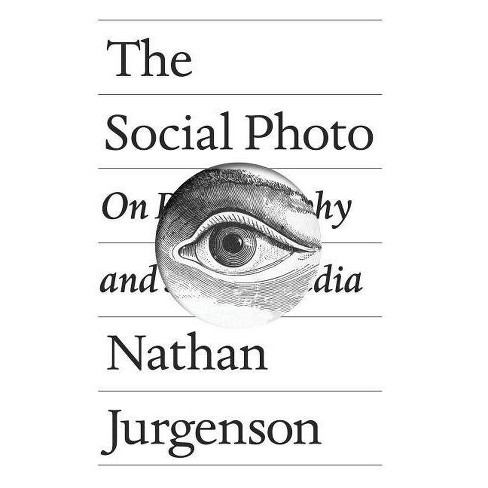 $11.49
MSRP$19.95
no reviews yet
be the first!be the first! ratings
Shipping
Free standard shipping with RedCard
Loading, please wait...
Help us improve this page

"A textual portrait of a visual medium, The Social Photo entices the reader to view social media through the lens of cultural critique. Ethereal and provocative, as rich as it is succulent."
--danah boyd, author of It's Complicated: The Social Lives of Networked Teens "Social photos are not primarily about making media but about sharing eyes, ' Nathan Jurgenson writes in this important and timely book. Grappling with the significance of the billions of largely ephemeral images that inhabit social media, he persuasively delineates many of the key boundaries between what was previously understood to be photography and the contemporary image environment."
--Fred Ritchin, author of Bending the Frame: Photojournalism, Documentary, and the Citizen "A refreshing respite from most of the commentary streaming from our devices today."
--Tim Bradshaw, Financial Times "Nathan Jurgenson is the Susan Sontag of the selfie generation--a bold, lucid, and important new voice in cultural criticism. In The Social Photo, he offers a truly groundbreaking analysis of how photography has changed in the age of social media, and how it is changing us. Every page crackles with insight and intelligence."
--Mia Fineman, Curator of Photographs, Metropolitan Museum of Art and author of Faking It: Manipulated Photography Before Photoshop "The world is glutted with pictures ... In The Social Photo, sociologist, media theorist, and Snapchat guru Nathan Jurgenson argues that this surfeit of images has ushered in a new way of seeing and existing in the world through our camera phones--one which no longer values the documentary function of photographs, but instead prizes their ability to expressively communicate with others."
--Frieze "[Jurgenson] has, for years, offered a valuable commentary on the cultural implications of social media."
--Tank ("Summer Reads") "Like Susan Sontag's On Photography, to which it self-consciously responds, The Social Photo is slim, hard-bitten and picture-free. For if the average photo is ever dumber, photography matters even more; the social photo, in Mr. Jurgenson's phrase, has effected a 'fusion of media and bodies' that has made every gallerygoer a cyborg."
--Jason Farago, New York Times ("Top Art Books of 2019") "Jurgenson is a good guide to our times."
--Times Literary Supplement
If the item details above aren’t accurate or complete, we want to know about it. Report incorrect product info.