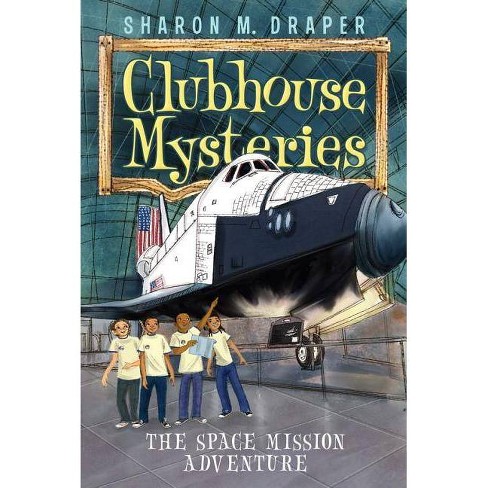 "Originally published as the series title 'Ziggy and the black dinosaurs'"--T.p. verso.

In this fourth book of the classic chapter book series by award-winning author Sharon M. Draper, four boys who call themselves the Black Dinosaurs go to space camp! Ziggy and his friends can't wait for space camp, where they'll get to learn about weightlessness and how astronauts eat--and use the bathroom--in space! But Ziggy has another goal: he wants to meet some aliens. Purple, three-headed Martians, preferably, just like in his Mega Mighty Martian Blaster game. Once he gets to camp, Ziggy learns that real-life space travel is even more exciting than what he imagined. But when a mysterious, shiny stone appears, Ziggy can't help but wonder if his dream of alien contact has just come true...

Sharon M. Draper is a three-time New York Times bestselling author and a recipient of the Margaret A. Edwards Award honoring her significant and lasting contribution to writing for teens. She has received the Coretta Scott King Award for both Copper Sun and Forged by Fire, and was awarded the Charlotte Huck Award for Stella by Starlight. Her novel Out of My Mind has won multiple awards and was a New York Times bestseller for over three years, and Blended has also been a New York Times bestseller. She lives in Florida, where she taught high school English for twenty-five years and was named National Teacher of the Year. Visit her at SharonDraper.com. Jesse Joshua Watson connects with people--where hammocking in Brazil, exploring Hong Kong, playing soccer in Haiti, or dodging taxis in Russia. He loves both the differences and similarities that are so colorfully displayed across our diverse world and reflects this passion in his illustrations, which have been featured in magazines, art publications, CD covers, children's books, and on The Oprah Winfrey Show. His work appears in the New York Times bestselling Hank Zipzer series, the Clubhouse Mysteries (Ziggy and the Black Dinosaurs) series, Hope for Haiti, and more. He won the 2005 grand prize and was a 2006 finalist at the international SCBWI New York Showcase. Jesse lives with his wife and sons in Washington where he teaches art to kids, plays music occasionally and soccer religiously, and surfs the chilly northwest waters as often as he can. Visit him online at JesseWatson.com.
If the item details above aren’t accurate or complete, we want to know about it. Report incorrect product info.