The Streets of Europe - by Brian Ladd (Hardcover) 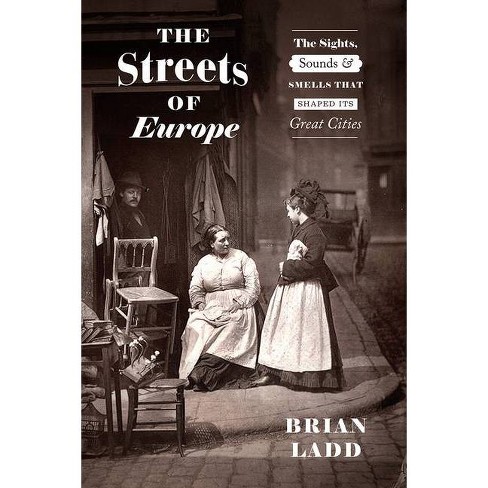 $30.00
new at target¬
no reviews yet
be the first!be the first! ratings
Release Date: coming soon!
Preorder for
Edit zip
Ships by release date with free standard shipping using RedCard
Help us improve this page

Merchants' shouts, jostling strangers, aromas of fresh fish and flowers, plodding horses, and friendly chatter long filled the narrow, crowded streets of the European city. As they developed over many centuries, these spaces of commerce, communion, and commuting framed daily life. At its heyday in the 1800s, the European street was the place where social worlds connected and collided. Brian Ladd recounts a rich social and cultural history of the European city street, tracing its transformation from a lively scene of trade and crowds into a thoroughfare for high-speed transportation. Looking closely at four major cities--London, Paris, Berlin, and Vienna--Ladd uncovers both the joys and the struggles of a past world. The story takes us up to the twentieth century, when the life of the street was transformed as wealthier citizens withdrew from the crowds to seek refuge in suburbs and automobiles. As demographics and technologies changed, so did the structure of cities and the design of streets, significantly shifting our relationships to them. In today's world of high-speed transportation and impersonal marketplaces, Ladd leads us to consider how we might draw on our history to once again build streets that encourage us to linger.
​
By unearthing the vivid descriptions recorded by amused and outraged contemporaries, Ladd reveals the changing nature of city life, showing why streets matter and how they can contribute to public life.
If the item details above aren’t accurate or complete, we want to know about it. Report incorrect product info.