The Theft of a Decade - by Joseph C Sternberg (Hardcover) 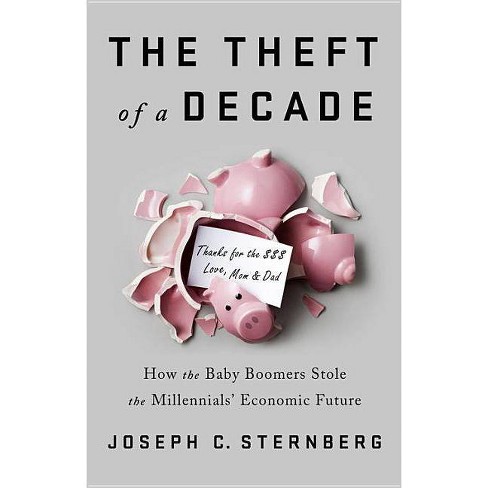 A Wall Street Journal columnist delivers a brilliant narrative of the mugging of the millennial generation-- how the Baby Boomers have stolen the millennials' future in order to ensure themselves a comfortable present The Theft of a Decade is a contrarian, revelatory analysis of how one generation pulled the rug out from under another, and the myriad consequences that has set in store for all of us. The millennial generation was the unfortunate victim of several generations of economic theories that made life harder for them than it was for their grandparents.
Then came the crash of 2008, and the Boomer generation's reaction to it was brutal: politicians and policy makers made deliberate decisions that favored the interests of the Boomer generation over their heirs, the most egregious being over the use of monetary policy, fiscal policy and regulation. For the first time in recent history, policy makers gave up on investing for the future and instead mortgaged that future to pay for the ugly economic sins of the present.
This book describes a new economic crisis, a sinister tectonic shift that is stealing a generation's future.

"The Theft of a Decade by borderline millennial Joseph Sternberg (born in 1982) exhibits unexpected sensitivity towards its villains... Sternberg, a US-born, London-based member of The Wall Street Journal's editorial board, prefers earnest discussion of Clinton-era labour reforms to cultural boomer-bashing... He slams misguided fiscal reforms and loose monetary policy for fuelling the financial crisis that left millennials entering the job market during a historic downturn and convincingly attributes the slow recovery on the fact that the establishment's solution consisted of more of the same - job-killing regulation and Fed-fuelled money out of a helicopter... Sternberg is sharpest and most persuasive when applying a conservative lens to debates such as those around tax cuts or the gig economy."--Financial News of London

"The Theft of a Decade shows how the same solutions tried over and over by Republicans and Democrats alike have not worked, and cannot work in the future. Both sides recognize that something has gone terribly wrong in our economy. But so far, neither has been willing to do the hard work of rethinking our approach to everything from education to monetary policy. Joseph Sternberg makes the strong case that we need to offer a new approach to solving our nation's problems, and resist the urge to double down on the failed policies of the past. This should be required reading, not just for millennials, but for all Americans."--Rep. Mike Gallagher (R-WI)

"A compelling summary of the conversations the Millennials are most interested in having."--LSE Review of Books

"A suggestive essay in demographics and political trends."--Kirkus Reviews

"A thoughtful, nuanced, and important light on the plight of Millennials. Crucially, Sternberg does it from a center-right, pro-market perspective rather than from the more familiar, center-left view that often gets mired in larger identity-politics formulations."--Jonah Goldberg, National Review

"If you're a Millennial, I strongly recommend this engaging book. It will arm you with all the facts you need about the problems you will face in the labor market, education, housing, and paying down the enormous debt left by your Boomer parents. And after you read it, PLEASE don't forget to vote!"--Isabel Sawhill, senior fellow at The Brookings Institution and author of Forgotten Americans: An Economic Agenda for a Divided Nation

"Riveting.. This is a must-read for cash-strapped millennials seeking to learn precisely how employment, investment, taxation, and the government's social safety net programs have changed drastically over the past generation."--Publishers Weekly

"Thoughtful and nuanced... Sternberg successfully makes the case that millennials face real problems because circumstances have changed. Those problems should generate both sympathy and solutions."--Ramesh Ponnuru, Bloomberg Opinion

Joseph C. Sternberg is editorial-page editor and European political-economy columnist for the Wall Street Journal's European edition. He joined the Journal in 2006 as an editorial writer in Hong Kong, where he also edited the Business Asia column. Born in 1982, he lives in London.
If the item details above aren’t accurate or complete, we want to know about it. Report incorrect product info.