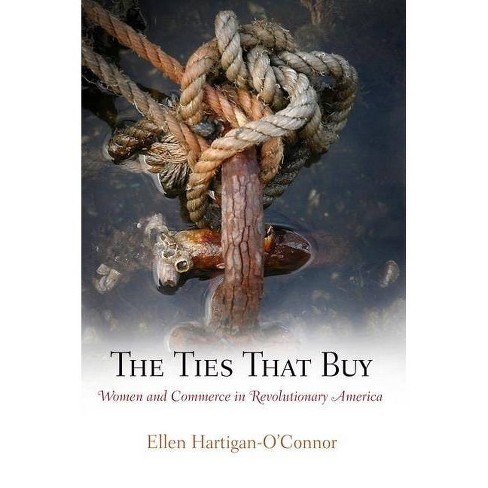 In 1770, tavernkeeper Abigail Stoneman called in her debts by flourishing a handful of playing cards before the Rhode Island Court of Common Pleas. Scrawled on the cards were the IOUs of drinkers whose links to Stoneman testified to women's paradoxical place in the urban economy of the late eighteenth and early nineteenth centuries. Stoneman did traditional women's work--boarding, feeding, cleaning, and selling alcohol--but her customers, like her creditors, underscore her connections to an expansive commercial society. These connections are central to The Ties That Buy.

Historian Ellen Hartigan-O'Connor traces the lives of urban women in early America to reveal how they used the ties of residence, work, credit, and money to shape consumer culture at a time when the politics of the marketplace was gaining national significance. Covering the period 1750-1820, the book analyzes how women such as Stoneman used and were used by shifting forms of credit and cash in an economy transitioning between neighborly exchanges and investment-oriented transactions. In this world, commerce reached into every part of life. At the hearths of multifamily homes, renters, lodgers, and recent acquaintances lived together and struck financial deals for survival. Landladies, enslaved washerwomen, shopkeepers, and hucksters sustained themselves by serving the mobile population. A new economic practice in America--shopping--mobilized hierarchical and friendly relationships into wide-ranging consumer networks that depended on these same market connections.

Rhetoric emerging after the Revolution downplayed the significance of expanding female economic life in the interest of stabilizing the political order. But women were quintessential market participants, with fluid occupational identities, cross-class social and economic connections, and a firm investment in cash and commercial goods for power and meaning.