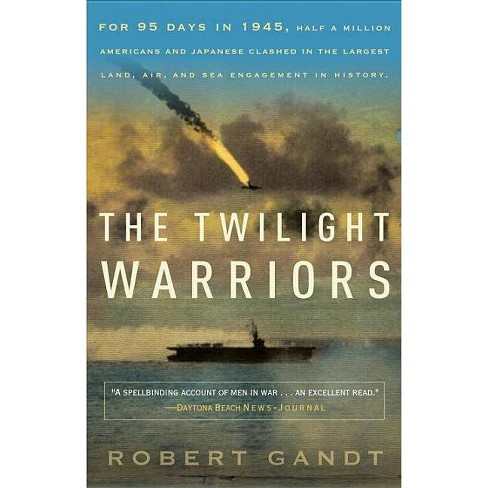 $11.89
MSRP$15.00
no reviews yet
be the first!be the first! ratings
Buy 2 get 1 free on video games, movies and books
Online only •
Shipping
Free standard shipping with RedCard
Loading, please wait...
Help us improve this page

"Military historian and novelist Gandt (Black Star Rising, 2007, etc.) chronicles the epic Battle of Okinawa. In the spring of 1945, as the Red Army approached Berlin, a ferocious land, sea and air battle raged in the Pacific, a dress rehearsal, many thought, for the upcoming invasion of Japan. The author credits the idea of bypassing the heavily fortified island of Formosa and seizing Okinawa to the brainy Adm. Raymond Spruance. Snapshots of Spruance, Marc Mitscher, Chester Nimitz, Ernest King, Morton Deyo and Arleigh Burke, towering names in American naval history, dot these pages, complemented by similar sharp takes on the Japanese high command defending the island. The heart of Gandt's story, though, is the tale of the young aviators, the Tail End Charlies on the American side, fearful they'd never get into action, and the Japanese Thunder Gods, the kamikaze force whose suicide missions testified simultaneously to Japan's will and her desperation. By no means comprehensive--Gandt checks in only periodically with the halting advance of Simon Buckner's 10th Army--the narrative, nevertheless, consistently enlightens on numerous battle-related issues and incidents: the rivalry between the black shoe (seagoing) and the brown shoe (aviation) navy; how the Japanese consistently overestimated the destruction caused by the kamikaze missions; the circumstances surrounding the deaths of Buckner and famed correspondent Ernie Pyle; the peculiar susceptibility of the wooden-decked U.S. carriers to kamikaze attack; the sinking of the mighty battleship Yamato; the exploits of American ace Al Lerch, who shot down seven planes in a single mission; the strength of the USS Laffey, still afloat after six kamikaze crashes. The appalling price in lives lost, men wounded, ships sunk and aircraft destroyed made Okinawa "the costliest naval engagement in U.S. history." Three months later the atomic bomb would fall on Hiroshima. A fine popular account of history's last great sea battle." -- Kirkus

"Written in a wonderful bold style, with pathos, humor, tragedy, and gripping suspense, Twilight Warriors captures the life and death struggle of sailors and airmen fighting the last great Pacific battle of World War II... A riveting masterpiece, a powerful tribute to all those sailors and pilots who went in harm's way. Five stars!" --Stephen Coonts, author of Flight of the Intruder

"This extremely well written history of the Battle of Okinawa is unusual in that it is perfect for both beginning students and for experts. It is a book that will leave you with unforgettable memories of the heroes who fought--on both sides--in the Okinawan twilight." --Walter J. Boyne, former director of the National Air and Space Museum, author of The Wild Blue. "Using the actual flying experience of the pilots of VBF-10 for center stage, Gandt broadens the scope of "The Twilight Warriors" by melding in Japanese air and sea operations with US operations to give us a complete view of the last big battle in the Pacific campaign. The detailed look at the personalities of American and Japanese warriors adds great insight into decisions made, both good and bad. It is both an informative and compelling read." --Dave North, Editor-in-Chief, Aviation Week & Space Technology (ret), USS Intrepid pilot
If the item details above aren’t accurate or complete, we want to know about it. Report incorrect product info.