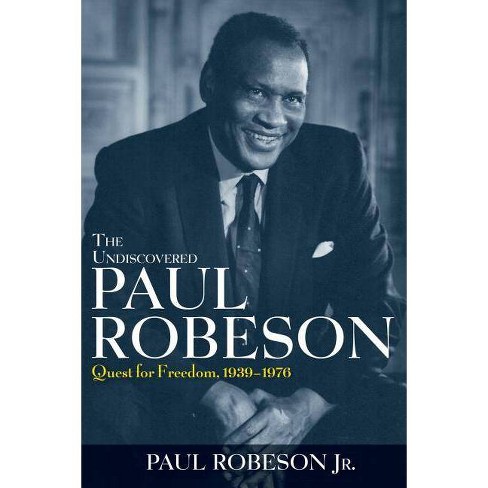 Paul Robeson moved to London in 1927 to escape the stifling racial environment of the United States. He returned to America in the fall of 1939 ready to take the nation by storm and tackle racism head on. Already established as a major figure of the stage, concert hall, and silver screen, he was also one of the world's best-known and most controversial political activists, revered by both the oppressed and many of the powerful on every continent. Yet, this compassionate and brilliant man's greatest successes and most difficult challenges still lay ahead.

In this second and final volume of his landmark biography, Paul Robeson Jr. continues to reveal the private and personal side of one of the twentieth century's most public men. He also uncovers previously unknown details behind his father's remarkable achievements and most furious battles.

A renowned scholar in his own right, Robeson Jr. draws on his parents' letters to each other and to close friends; personal diaries; his own memories of countless conversations and shared experiences with his father; interviews with friends and associates; and the huge Paul Robeson dossier assembled by the FBI to present a stunning portrait of this iconic figure as a complex, courageous, and powerful human being.

This intimate biography reveals a man who was equally at ease performing for heads of state and striking union members, but who craved moments of solitude when he could study a new language or relax with friends. Yet, even as he entranced the nation with his resonant bass voice in radio and concert appearances and later as Othello in Broadway's longest-running production of a Shakespeare play, Robeson's activism brought him to the attention of the FBI, the CIA, anticommunists, and pro-segregationists. These enemies had powerful weapons at their command. Robeson was blacklisted in 1949 and his passport was revoked in 1950.

Robeson Jr. reveals how his father overcame the personal anguish and deprivation to remain defiant in the face of eight years of official government persecution. He also tells the story behind the CIA's mysterious attempts to break his father's spirit in the later years of his life. They may have drugged him during a visit to Moscow and, in subsequent years, possibly influenced his treatment at a London hospital.

Complete with a wealth of previously unpublished photos from Robeson's personal and professional life, The Undiscovered Paul Robeson: Quest for Freedom, 1939-1976 provides inspiring, and sometimes terrifying, reading as it traces the dramatic arc of one of the world's most distinguished performing artists and passionate leaders in the fight for universal human rights.