The Unlikely Peace at Cuchumaquic - by Martin Prechtel (Hardcover) 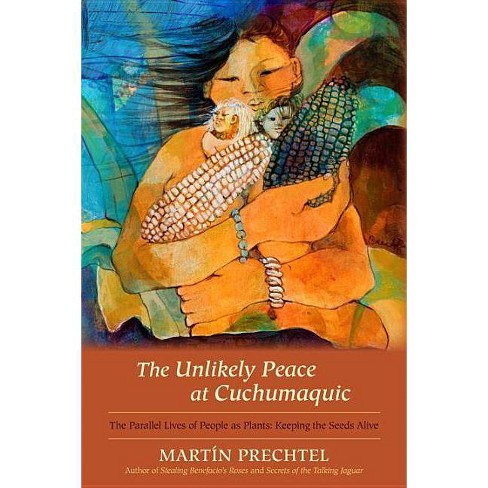 $17.99
MSRP$24.95
no reviews yet
be the first!be the first! ratings
Shipping
Free standard shipping with RedCard
Loading, please wait...
Help us improve this page

"The Unlikely Peace at Cuchumaquic is like one of the seeds Martín Prechtel describes. When planted in fertile ground, the words and thoughts and images and prayers will grow into a life-giving complexity. This is a wondrous and powerful book."--Derrick Jensen, activist and author of Dreams and Endgame "A brilliant writer, Martín Prechtel bears gifts from our ancestors, gifts that are essential to awaken a wayward humanity to the need for a spiritual ecology."--Michael Harner, author of The Way of the Shaman "Prechtel's words are like the wildly colored heirloom kernels of corn born of ancestral knowledge that traditional Maya farmers prayerfully place into the holy earth. Once planted, the author waters these sacred seeds of the Indigenous Soul with heartfelt compassion for a spiritually disconnected humanity in this period of global transformation. May these sprouts of indigenous awareness flourish and produce vital seeds for a collective return to an awareness of our oneness with nature."--Robert Sitler, director of Latin American Studies at Stetson University, Florida, and author of The Living Maya "A haunting and enchanting prose poem that encompasses a shattering earthquake, the rapacious disaster capitalism that fed on it, and the resilience of an indigenous culture whose authenticity carried it through those dark times.... Martín Prechtel's deep wisdom has given us a model that can be replicated everywhere, so that from the moral bankruptcy and collapse of global capitalism a true human culture, in union with the wild, can emerge."--Toby Hemenway, author of Gaia's Garden "It is very important, especially nowadays in the face of the monsters of GMO agribusnesses, that someone speaks out so clearly and eloquently about saving the pure and strong seeds that nature itself brought forth. And, of course, Martín Prechtel is also right about the seeds we carry within us, given to us from our age-old culture...."--Wolf D. Storl, author of The Herbal Lore of Wise Women and Wortcunners "Martín Prechtel has seen it all: He grew up on a Pueblo Indian reservation, was apprenticed to a Guatemalan medicine man and settled in the United States after fleeing the Guatemalan civil war. The Unlikely Peace at Cuchumaquic: The Parallel Lives of People as Plants: Keeping the Seeds Alive (North Atlantic Books) relates the preservation of seeds and plant life to the similar seeds of spirituality in human life as he chronicles his own life journey." --Indian Country "The Unlikely Peace at Cuchumaquic: The Parallel Lives of People as Plants: Keeping the Seeds Alive reflects the author's experiences growing up on a Pueblo Indian reservation and his years of apprenticing to a Guatemalan shaman, returning to the U.S. after fleeing the country's civil war ... Real human culture is exterminated when the non-genetically modified seeds of plants that feed us are lost - and this appraoches the issue both metaphorically and spiritually, discussing how such seeds of spirituality and culture need to be cherished, replanted, and harvested. Collections strong in tribal insights, ecology, spirituality, and autobiography alike will find this a moving, passionate work." --Midwest Book Review
If the item details above aren’t accurate or complete, we want to know about it. Report incorrect product info.