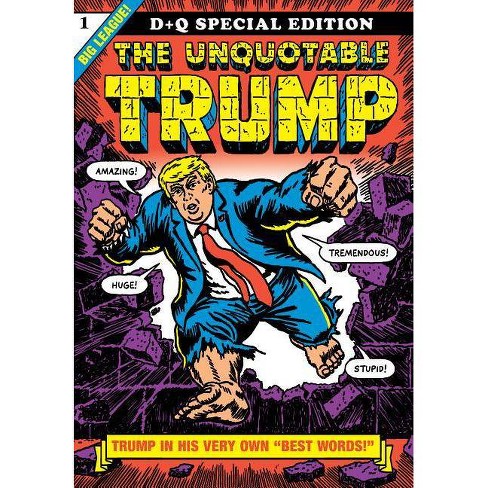 "Sikoryak, an artist known for his arch comic adaptations of literary classics, casts President Trump, along with his outlandish claims and alternative facts, as some of the most notable villains in comic book history."--New York Times

"A fiendishly exact homage to beloved comics (from "Watchmen" to "Archie"), recasting each with Donald Trump and a few infamous quotes."--Christopher Borrelli, Chicago Tribune

"A beautiful celebration of comic-book art and a spectacular satire of President Evil."--Mark Peters, Salon

"Under the shadow of the impending Trump administration, many people aren't sure whether they want to laugh or cry. Artist R. Sikoryak has us doing both."--E.C. Flamming, Paste

"It's both amazing and depressing at the same time..."--Katharine Trendacosta, iO9

"If you're one of those people who always considered comic book dialogue to be too unrealistic, bombastic, or plain silly, then real life has nothing on art when it comes to the utterances of Donald J. Trump."--David Barnett, The Independent

"Sikoryak has proven that comics are truly the most fitting medium to consume Trump's words."--Claire Voon, Hyperallergic

"If you've ever wondered what it's like to recognize that something is funny and clever while also being horrifying and sad, it feels like this."--Sam Barsanti, AV Club

"[The Unquotable Trump is] one of the most interesting and subversive uses of superhero iconography to critique Trump and his policies."--Rob Salkowitz, Forbes