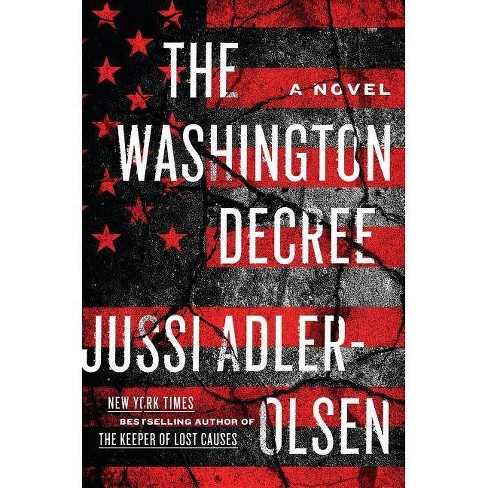 $12.39
MSRP$28.00
no reviews yet
be the first!be the first! ratings
Shipping
Free standard shipping with RedCard
Loading, please wait...
Help us improve this page

Praise for The Washington Decree

"Adler-Olsen writes as if he's lived in the United States his entire life, and the novel reads as if it were written recently, not years ago. This thought-provoking and timely political thriller shows the author can craft more than compelling crime scenarios."--Associated Press "A tantalizing and timely premise makes this political thriller one of those all-too-real scenarios that leave you thinking once you're done. Spicy, smart, and entertaining."--Steve Berry, New York Times bestselling author "Adler-Olsen weaves a thought-provoking dystopia. . . . A hauntingly timely political thriller."--Booklist "Scarily relevant."--Library Journal "Absolutely terrifying."--The Real Book Spy More Praise for Jussi Adler-Olsen: "Satisfyingly dark, both in tone and content . . . An undeniable page-turner."--Publishers Weekly on The Scarred Woman "Adler-Olsen wields a one-two punch of psychological suspense, as his trademark parallel plot follows the remorseless killer's manipulations while the humorous, sometimes touching rapport between Mï¿½rck and Assad threatens to steal the show."--Booklist (starred review) on The Hanging Girl "This is a suspense/thriller to beat them all. Not only does it offer action, but readers will start waiting for the rabbit to jump out of the hat and change everything."--Suspense Magazine on The Alphabet House "A tense, pleasurable read."--USA Today on The Marco Effect "[A] sordid tale . . . inspired by actual events during a dark period of Danish history. Ah, but there is more, so much more in this frenzied thriller."--The New York Times Book Review on The Purity of Vengeance "A shattering parable of honest individuals caught up in the corruption of our times."--Publishers Weekly (starred review) on A Conspiracy of Faith
If the item details above aren’t accurate or complete, we want to know about it. Report incorrect product info.