The Waving Girl - by J B Nicholas (Paperback) 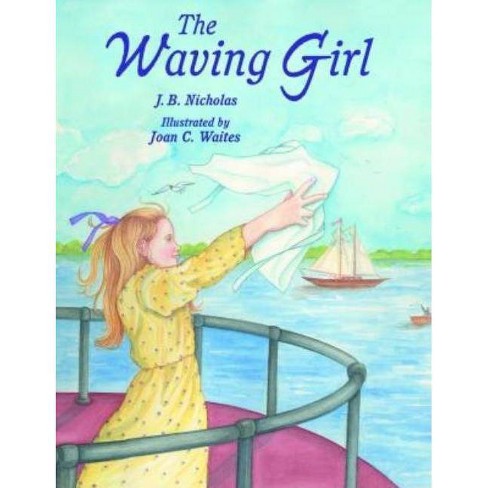 $5.59
no reviews yet
be the first!be the first! ratings
Shipping
Free standard shipping with RedCard
Help us improve this page

"Waites's watercolors are pleasingly old-fashioned, with romantic flair for the scenery and costume of the times."
--School Library Journal

Flora Martus lived on Elba Isle near Savannah, Georgia, in the early 1900s. She, her brother, and her father were the lighthouse keepers there, and Flora loved watching the ships pass back and forth. But the life of a lighthouse keeper is a lonely one, and Flora missed playing with other children. Her father comforted her with the idea that she would always be a light for others.
For more than sixty years, Flora Martus happily waved to the passing ships, which were her nearest neighbors. It became a tradition for passing ships to honk their horns or blow their whistles at the girl, and then the woman, waving from the lighthouse. Flora's fame spread across the globe, and she sometimes received exotic gifts from far-off places, all addressed to "The Waving Girl."
As time passed, Flora was left to run the lighthouse with her brother, and before long, when they grew old, it was time for someone else to run the lighthouse. For Flora's seventieth birthday, Savannah honored its beloved waving girl by throwing a party for three thousand people. A bronze statue in her honor was erected on the south end of River Street in Savannah, Georgia, in 1971.
Author J. B. Nicholas is a former third-grade teacher who now writes full time. She is a member of the Society of Children's Book Writers and Illustrators and a graduate of Wheaton College. She lives in Cincinnati, Ohio, with her family.
Illustrator Joan C. Waites is a member of the Society of Children's Book Writers and Illustrators and also illustrated the Pelican book "Moon's Cloud Blanket," a Storytelling World Award Honor Title for 2004. Ms. Waites lives in Silver Spring, Maryland.