The Widow of Rose House - by Diana Biller (Paperback) 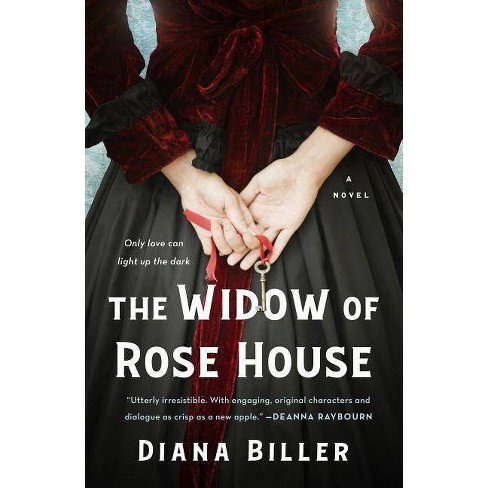 A young widow restores a dilapidated mansion with the assistance of a charming, eccentric genius, only to find the house is full of dangerous secrets in this effervescent Gilded Age debut novel.

The Widow of Rose House is close to perfection and any lover of historical romance will adore this debut. - Smart Bitches Trashy Books

It's 1875, and Alva Webster is ready for a fresh start. After three years of being pilloried in the presses for fleeing her abusive husband, his sudden death allows her to return to New York where she is determined to restore a dilapidated Hyde Park mansion, and hopefully her reputation at the same time. She is decidedly not supposed to fall in love. But when a haunting at her new home threatens her careful plans, she must seek help from the eccentric and brilliant and - much to her dismay - very handsome Professor Samuel Moore. Alva doesn't need more complications in her life, especially not a convention-flouting, scandal-raising one like Sam. Unfortunately, Sam is the only one who can help. Together, the two delve into the tragic secrets wreathing Alva's new home while Sam attempts to unlock Alva's history--and her heart. Set during the Gilded Age in New York City, The Widow of Rose House is a gorgeously romantic debut by Diana Biller, with an intrepid and resilient American heroine guaranteed to delight readers as she starts over and finds true love. A chemistry-fueled debut with a bit of a ghost story, great for readers of gothic romance. - Booklist Biller mirrors Wharton's genius for revealing the emotional gold lying beneath the Gilded Age, which motivates the novel's massive romantic turmoil. - Bookpage (Most Anticipated Romances)

A chemistry-fueled debut with a bit of a ghost story, great for readers of gothic romance. - BOOKLIST

The Widow of Rose House is close to perfection and any lover of historical romance will adore this debut. - SMART BITCHES TRASHY BOOKS

Biller mirrors Wharton's genius for revealing the emotional gold lying beneath the Gilded Age, which motivates the novel's massive romantic turmoil. - BOOKPAGE A ghost-hunting adventure and sweeping romance in equal parts, and peppered with moments of breath-holding tension, it amazes me that this Gilded Age gem of a story is a debut effort. It's a moving, evocative, beautifully told and, at times, chilling read, and even when I desperately wanted to speed ahead to find out what happens in the end, I made myself savour every exquisite last word of it. - NATASHA IS A BOOK JUNKIE BOOKPAGE, Most Anticipated Romance BOOKRIOT, 10 Ghost Romances To Ring In The Halloween Season BOOKISH, October Book Club Picks POPSUGAR, These 17 Books Will Give You the Same Romantic Thriller Vibes as Rebecca Biller's complex and intriguing debut, set in 1875 New York City...is part romance, part ghost story, and part period piece with just enough modern sentiment on the topics of feminism, mental illness, and abuse. - PUBLISHERS WEEKLY Utterly irresistible. With engaging, original characters and dialogue as crisp as a new apple, Diana Biller's debut will have you rooting for Alva and Sam through every spooky twist. - Deanna Raybourn, New York Times bestselling author of the Veronica Speedwell series "Take a Joanna Shupe Gilded Age romance, stir in a Simone St. James ghost story, add a pinch of Julia Quinn banter, and, voila! Sheer fun with a satisfying emotional conclusion." - Lauren Willig, New York Times bestselling author of The English Wife Get ready to devour Diana Biller's magnificent debut novel in one sitting. The Widow of Rose House boasts memorable and vibrant characters, a delicious romance, great period detail, and a hint of the supernatural. Alva and Sam spring off the page and to life, so that I now feel as though they are friends of mine. This novel is a treat not to be missed! - Alyssa Palombo, author of The Spellbook of Katrina Van Tassel

DIANA BILLER lives in Los Angeles with her husband and their very good dog. She is the author of The Widow of Rose House and The Brightest Star in Paris.
If the item details above aren’t accurate or complete, we want to know about it. Report incorrect product info.