The Willoughbys - by Lois Lowry (Hardcover) 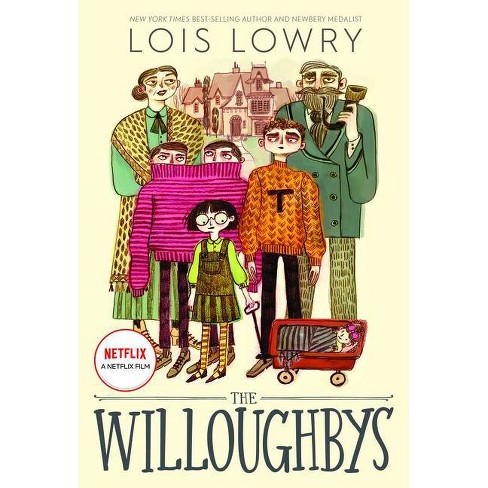 Soon to be an animated film on Netflix starring Ricky Gervais, Maya Rudolph, Terry Crews, Martin Short, Jane Krakowski, and Sean Cullen! A beautiful new edition of New York Times bestseller The Willoughbys, including an excerpt from the sequel, The Willoughbys Return.

Soon to be an animated film on Netflix starring Ricky Gervais, Maya Rudolph, Terry Crews, Martin Short, Jane Krakowski, and Sean Cullen! A beautiful new edition of New York Times bestseller The Willoughbys, including an excerpt from the sequel, The Willoughbys Return. This "sparklingly smart" (Kirkus, starred review) and "hilarious" (Booklist, starred review) story follows four children in an old-fashioned kind of family with parents that--well, they're not all that one would hope for. The Willoughbys--Timothy; the twins, Barnaby A and Barnaby B; and their sister, Jane--concoct a diabolical plot to turn themselves into worthy and winsome orphans. Little do they know that Mr. and Mrs. Willoughby, their odious mother and father, have already begun to formulate their own thoroughly despicable plan. Soon a stern nanny, an abandoned baby, a candy magnate and his long-lost son, and even a Swiss postman are pulled into the Willoughby children's schemes to escape their mother and father and live happily ever after...or something like that. Replete with a tongue-in-cheek glossary and bibliography, this hilarious parody pays playful homage to classic works of children's literature with a fresh twist sure to please.

A New York Times bestseller
Parents' Choice Gold Award
Iowa Children's Choice Award
Kentucky Bluegrass Award Nominee
West Virginia Children's Book Award
Handpicked for Amazon Prime Book Box * "The tone of this darkly dry pastiche is consistently witty, and it's chock-full of accessible parodic references to...classic children's texts...Lowry crafts a tidy plot."--The Bulletin, starred review * "Lois Lowry, who casts her noble and enviable shadow wide across the landscape of children's literature, from fantasy to realism, here turns her quick, sly gaze to parody, a word which in this case means 'a short novel mocking the conventions of old-fashioned children's books stuffed with orphans, nannies and long-lost heirs.'"--Publishers Weekly, starred review, written by Lemony Snicket * " Sly humor and a certain deadpan zaniness give literary conventions an ironic twist, with hilarious results....Great fun."--Booklist, starred review * "With this fey venture into kiddie Gothic, the august two-time Newbery winner and author of the beloved Anastasia Krupnik series proves that a writer can always reinvent herself....Readers who are willing to give themselves up entirely to the sly foolishness will relish this sparklingly smart satire, which treats them with collegial familiarity."--Kirkus Reviews, starred review

Lois Lowry is the author of more than forty books for children and young adults, including two Newbery Medal winners, Number the Stars and The Giver. Her first novel, A Summer to Die, was awarded the International Reading Association's Children's Book Award. Ms. Lowry lives in Maine.
If the item details above aren’t accurate or complete, we want to know about it. Report incorrect product info.