The Witcher Boxed Set: Blood of Elves, the Time of Contempt, Baptism of Fire - by Andrzej Sapkowski (Paperback) 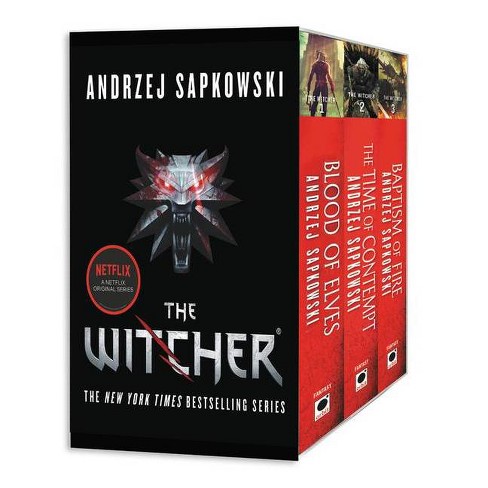 4.5 out of 5 stars with 8 reviews
88 ratings2 Questions2 Questions questions

NOW A NETFLIX ORIGINAL SERIES This special boxed set includes the first three novels in Andrzej Sapkowski's New York Times bestselling epic fantasy saga--the books that inspired the hit Netflix show and the blockbuster video games. For over a century, humans, dwarves, gnomes, and elves have lived together in relative peace. But times have changed, the uneasy peace is over, and now the races are fighting once again. The only good elf, it seems, is a dead elf. Geralt of Rivia, the cunning assassin known as The Witcher, has been waiting for the birth of a prophesied child. This child has the power to change the world -- for good, or for evil. As the threat of war hangs over the land and the child is hunted for her extraordinary powers, it will become Geralt's responsibility to protect them all--and the Witcher never accepts defeat. In Blood of Elves, The Time of Contempt, and Baptism of Fire, Sapkowski brings a fresh new voice to fantasy fiction, creating something wholly original in this dark and exciting world of magic, monsters and witchers.
Witcher novels
Blood of Elves
The Time of Contempt
Baptism of Fire
The Tower of Swallows
Lady of the Lake
Season of Storms Witcher collections
The Last Wish
Sword of Destiny Hussite trilogy
The Tower of Fools The Malady and Other Stories: An Andrzej Sapkowski Sampler (e-only) Translated from original Polish by Danusia Stok and David French

The universe of Sapkowski's The Witcher is one of the most detailed and best-explored in modern fantasy, offering endless opportunities for fresh ideas ... Complex character relationships enrich this already complex world; this is the sort of series fantasy fans will cherish.--B&N

The Witcher delivers one of the most intense and rewarding role-playing experiences this year.--GT Reviews on The Witcher video game

Like a complicated magic spell, a Sapkowski novel is a hodgepodge of fantasy, intellectual discourse, and dry humor. Recommended.--Time

One of the best and most interesting fantasy series I've ever read. Though it functions well as adventure fiction, it has added depth and value as satire and commentary on fantasy literature ... Sapkowski is a genuine stylist.--Nerds of a Feather

This is a series you can sink your teeth into.--BuzzFeed News

Andrzej Sapkowski was born in 1948 in Poland. He studied economy and business, but the success of his fantasy cycle about the sorcerer Geralt of Rivia turned him into a bestselling writer. He is now one of Poland's most famous and successful authors.
If the item details above aren’t accurate or complete, we want to know about it. Report incorrect product info.