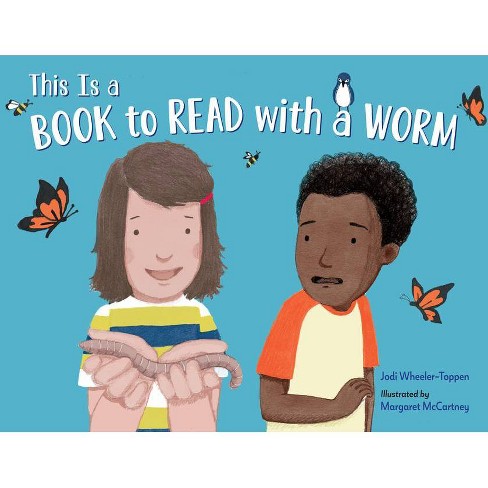 "If you can find a worm, then you can be a biologist! Foster a love of animals and science with this charming manual for finding and observing earthworms. Hands-on experiments help young zoologists answer questions like "Which end is which?" and "Do worms make noise?" Insider tips encourage readers to think like a scientist and handle living things with care. Equal parts activity book and picture book, This Is a Book to Read with a Worm is just as entertaining without a squirmy, wormy friend."--

If you can find a worm, then you can be a biologist! Foster a love of animals and science with this charming activity guide for finding and observing earthworms. Hands-on experiments help young biologists answer questions like Which end is which? and Do worms make noise? Insider tips encourage readers to think like a scientist and handle living things with care. Equally entertaining with or without a worm friend.

Readers are encouraged to find a worm and to employ careful observation techniques.-- Immediately after the title page, a bespectacled worm wearing a blue scarf--it acts as commentator throughout--reminds readers to be gentle when picking up worms and to return them safely to their places of origin after studying them. (Environmentally conscious endnotes both suggest acquiring a worm from a bait shop if one is not available outside and caution against introducing these worms into the natural environment.) Two children, one black and one white, look out toward readers as if hearing the words printed above them: Stop! To read this book you are going to need a worm. Indeed, without a worm in hand, half of the text becomes moot. Readers--along with the two children--are urged to run a finger along the worm's body; to stare into the worm's face; to carefully observe worm sensitivities to alcohol fumes and light beams; to listen for the bristles called setae by holding up a paper-wrapped worm to an ear; to create a one-night, dirt-filled worm hotel in a clear plastic bottle. For a book that seems otherwise eco-conscious, it is a surprise that a glass jar used with care is not recommended over plastic. As the gently humorous text gives directions and nature facts, the whimsical worm's speech bubbles offer vocabulary pronunciations and tips about keeping worms healthy while they are under surveillance. The graphic art is lively and colorful, well matched with the text. For exciting, optimal use, expect brown-edged pages.
--Kirkus Reviews
"Stop! To read this book you are going to need a worm," this succinct guide instructs readers. After being advised to be gentle with their wriggly subject, readers follow along as two friends, an African American boy and a white girl, find a worm and learn about its body and habits. While Wheeler-Toppen's (Recycled Science, 2016) book takes the form of a story, each double-page spread imparts one main idea and accompanying instructions and facts. Large-scale diagrams show the parts of a worm, and insets offer extra facts, worm-anatomy terms with pronunciation, and tips about how to care for the creatures (a cartoon worm appears occasionally to offer advice and thanks). A closing spread takes a more traditional approach, offering information about how worms reproduce and how to distinguish among worm species. The clear, pleasing illustrations throughout are done in muted primary colors and earth tones, complementing the book's message to be kind when dealing with nature. A classroom study of worms could benefit from this book, alongside Vivian French's Yucky Worms.
--Booklist

Jodi Wheeler-Toppen is a science teacher and science writer with a passion for helping young people become confident science readers and writers. Her many books for curious kids include Cat Science Unleashed, Dog Science Unleashed, Edible Science, Recycled Science, and the Our Amazing Senses series. Jodi does NSTA professional development workshops and author visits across the country. Margaret McCartney studied illustration at Rhode Island School of Design. Her design work has appeared on everything from garden gloves to comics to her own line of children's wear, Winter Water Factory. This Is a Book to Read With a Worm is her first book. www.margaret-mccartney.com
If the item details above aren’t accurate or complete, we want to know about it. Report incorrect product info.