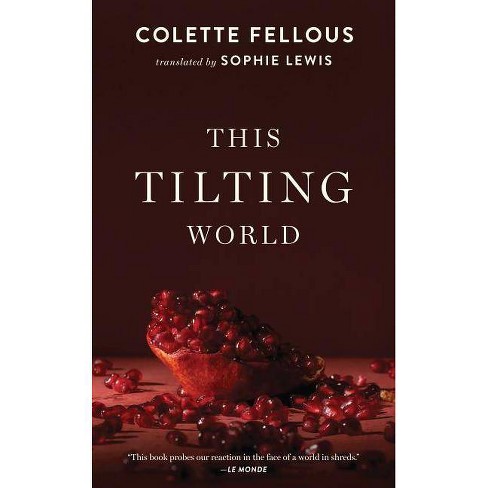 "[Fellous] observes the rituals and language that fabricate an identity, focusing on what happens when these things dissolve or become fragmented... This piece of autofiction has a strange and perfectly balanced duality of softness and seriousness. The text is melancholic and nostalgic, but also urgent and of its time." --Guardian

"A moving meditation on exile and identity." --Financial Times

"This Tilting World is a fast-moving reflection on leaving Tunisia following the terrorist attack that killed thirty-eight tourists on the beach at Sousse . . . A meditative nonfiction horror story on the North African coast [that] crashes over the reader in waves."--Nate McNamara, Lit Hub

"In This Tilting World, French-Tunisian novelist Fellous has written something more intimate than a novel . . . Against an act of terrorism that threatened to transform her polyglot Tunisian world of castoff peoples [...] into something unrecognizable, the flight into memory is a refusal to let them be swept away."--San Francisco Chronicle

"[A]n impressionistic journey through and beyond the comforts of nostalgia...This Tilting World is an experience of finding comfort within our own histories, as torn and whirling as they are."--Vol. 1 Brooklyn

"A bewitching, hallucinatory elegy to home and exile, love and death, memory and loss. In precise, haunting prose, Fellous evokes the places and relationships, smells and sounds that make up this jig-saw of memories, set against the violence of contemporary events in Tunisia and France."--Natasha Lehrer

"Colette Fellous' beautiful book, humming and dancing with sensual intelligence, newly vivid in Sophie Lewis's deft, delicate, agile version, takes change and translation as its very themes. It asks us to imagine leaving home, searching for a new home. That home may simply be language itself, a web of knot-ted meanings. However, if that web serves as a rope bridge slung between places and people, and the bridge is cut and falls, survival is put at stake. This Tilting World explores how, after such a rupture, one woman tries to re-compose the meanings of her life and thereby go on living."--Michï¿½le Roberts

". . . a reflection--sensitive and honest--on our present, this impossible present, this threshold between yesterday and a complex future, where we 'see also how our life was entirely manufactured by the political history, even though we thought it belonged to us, that it was 'personal.'"--Diacritik

"Colette Fellous isn't lacking an address, but has two homelands: her birthplace, Tunisia, and her language, French. Between them is an arc, a tension, an energy: that of a double belonging which does not alienate but provides an opening." --Le Monde

"[Fellous] enchants with her way of capturing emotions, sensations, moments, and people. She elegantly opens the doors to the past." --Livres Hebdo