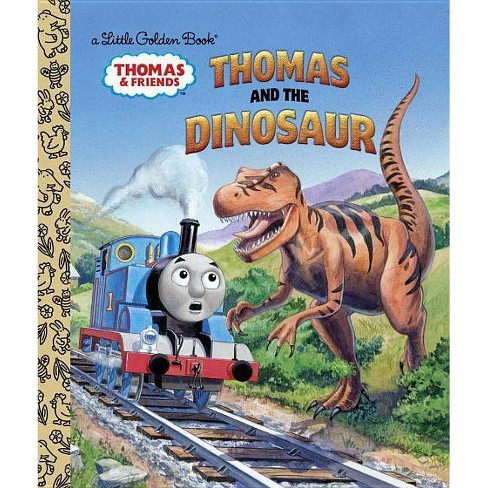 "Adapted from Thomas and the dinosaur by Christopher Awdry, originally published in Great Britain in 1997 by Reed Books Children's Publishing."

Thomas the Tank Engine and his friend Percy are startled--and scared--to see a dinosaur in the forest! Train-l and dinosaur-obsessed boys ages 3 to 7 will get a double thrill from this Thomas & Friends Little Golden Book.

In 1942, the launch of Little Golden Books revolutionized children's book publishing by making high-quality picture books available at affordable prices. More than 60 years later, many of the original Golden Book titles are still wildly popular, with The Poky Little Puppy topping the list of ten bestselling children's books of all time. Golden Books' backlist is teeming with classics such as Dorothy Kunhardt's Pat the Bunny, and features the stories and artwork of children's book legends Mary Blair, Margaret Wise Brown, Richard Scarry, Eloise Wilkins, Garth Williams, and many more. Today, the Golden Books imprint includes an array of storybooks, novelty books, and coloring and activity books featuring all of the most popular licenses, including Disney, Nickelodeon, Barbie, Thomas & Friends, The Cat in the Hat, Sesame Street, Marvel Super Heroes, and DC Super Friends. Golden Books continues to reissue the best of its backlist in a variety of formats, including ebooks and apps, as well as bringing out brand-new books in these evolving new formats. Thomas Lapadula is an illustrator known for books in the Thomas the Tank Engine series, True-Life Treasure Hunts, The Truck Book, and many more.
If the item details above aren’t accurate or complete, we want to know about it.

4 out of 5 stars
Would recommend
hpyshpr - 6 years ago
I bought this for a child that loves Thomas the Tank Engine and dinosaurs. It's not a great story but Thomas and a dinosaur are included so it should be acceptable to a four year old.
2 guests found this review helpful. Did you?