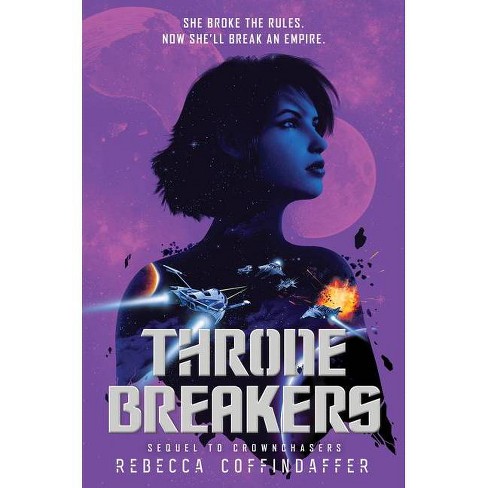 Perfect for fans of Aurora Rising, The Hunger Games, and Three Dark Crowns, this electrifying duology closer is jam-packed with tension and thrills that will hook readers from its first page.

Alyssa Farshot never wanted to rule the empire. But to honor her uncle's dying wish, she participated in the crownchase, a race across the empire's 1,001 planets to find the royal seal and win the throne. Alyssa tried to help her friend, Coy, win the crownchase, but just as victory was within their grasp, Edgar Voles killed Coy--and claimed the seal for himself.

Broken-hearted over her friend's death, Alyssa is hell-bent on revenge. But Edgar is well protected in the kingship. Alyssa will have to rally rivals, friends, and foes from across the empire to take him down and change the course of the galaxy.

"Packed with action, snark, and a competition to claim the rule of the empire, Crownchasers is a love letter to all that is good in science fiction."--The Nerd Daily

"This story blasts off from the first page--hang on for one hell of a ride!"

"With stakes that are as personal as they are political, Coffindaffer delivers a fast-paced adventure that pulls no punches. Dynamic and explosive!

PRAISE FOR Crownchasers: Crownchasers is a sharp, smart, and exhilarating space adventure, filled with intrigue and romance, unique tech and all the cool alien worlds you could wish for!"
--Tessa Gratton, author of Strange Grace and The Queens of Innis Lear

With a voice that punches you straight between the eyes, Crownchasers is a rip-roaring good time. Fun, fast, witty, and deep, this space opera takes classic tropes and puts them through an intergalactic spin cycle. A fresh take on the final frontier.--Sarah Henning, author of Sea Witch and Sea Witch Rising