Thunderchief: The Complete History of the Republic F-105 - by Dennis Jenkins (Hardcover) 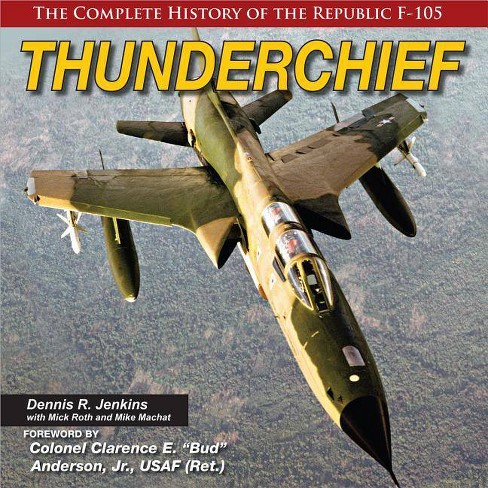 Authored by one of America's top aviation writers, this book continues the story of Republic's Mach-2 F-105 Thunderchief where previous books on this aircraft left off.

The Republic F-105 Thunderchief gained fame in the skies over Southeast Asia, carrying weapons it was not designed to use in a war it was not supposed to fight. It had been conceived to carry the new tactical nuclear weapons designed by the national laboratories during the early 1950s. Its target would be the Soviet Union during the height of the cold war, operating from well-equipped bases in Germany and Japan. Instead, it found itself in the jungles of Thailand, surrounded by heat and humidity, trying to fight a war as dictated by politicians 7,000 miles away. Too many missions were flown with only a few bombs per aircraft, simply so Washington could count sorties. Too many crews never came back. This is the complete history of the Republic F-105 Thunderchief, from its inception in the early 1950s to its retirement in the mid-1980s.

The F-105 holds the distinction of being the only American combat aircraft withdrawn from service simply because there were not enough of them remaining to be tactically useful. The Thunderchiefs flew 159,795 combat missions in Southeast Asia, resulting in the loss of 334 aircraft, most of them to North Vietnamese anti-aircraft fire. This was almost half the combat-capable F-105s built. One hundred fifty-six crewmembers were listed as killed in action or missing in action. Two pilots received the Medal of Honor.

After the Air Force withdrew them from Southeast Asia, leaving the war to the newer and more plentiful McDonnell Douglas F-4 Phantom II, the remaining Thuds settled into a quiet routine stateside until they were finally retired on 25 February 1984. By then, only 221 airframes were left of the 833 produced.

In 2018, there is not a single flyable Thunderchief, although at least 100 of them are in museums, available to be admired at one's leisure.