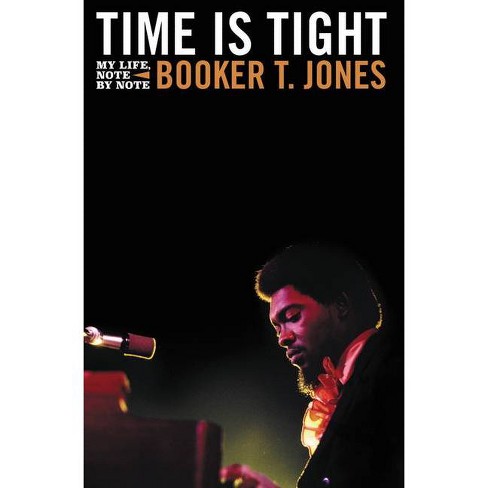 The long-awaited memoir of Jones, leader of the famed Stax Records house band, architect of the Memphis soul sound, and one of the most legendary figures in music.

The long-awaited memoir of Booker T. Jones, leader of the famed Stax Records house band, architect of the Memphis soul sound, and one of the most legendary figures in music.

From Booker T. Jones's earliest years in segregated Memphis, music was the driving force in his life. While he worked paper routes and played gigs in local nightclubs to pay for lessons and support his family, Jones, on the side, was also recording sessions in what became the famous Stax Studios-all while still in high school. Not long after, he would form the genre-defining group Booker T. and the MGs, whose recordings went on to sell millions of copies, win a place in Rolling Stone's list of top 500 songs of all time, and help forge collaborations with some of the era's most influential artists, including Otis Redding, Wilson Pickett, and Sam & Dave.
Nearly five decades later, Jones's influence continues to help define the music industry, but only now is he ready to tell his remarkable life story. Time is Tight is the deeply moving account of how Jones balanced the brutality of the segregationist South with the loving support of his family and community, all while transforming a burgeoning studio into a musical mecca.
Culminating with a definitive account into the inner workings of the Stax label, as well as a fascinating portrait of working with many of the era's most legendary performers-Bob Dylan, Willie Nelson, and Tom Jones, among them-this extraordinary memoir promises to become a landmark moment in the history of Southern Soul.

One of the Oakland Press's Best Music Books of the Fall

Time Is Tight is a whirlwind tour through Booker's incredible journey from his humble beginnings in Memphis through his tenure backing up the likes of Otis Redding, Sam and Dave, Albert King and Carla Thomas to his blossoming as an acclaimed producer and songwriter. Told with heart and soul and interspersed with loving memories of his wonderful family and talented cohorts. The story is also rife with the turbulent times he has lived through from the King assassination, the fall of Stax and Al Jackson's murder. Through it all, Booker narrates with his intelligence and wit as we travel back and forth through these amazing life and times. Absolutely one of the most engaging and engrossing memoirs I have ever read. --Patterson Hood, writer, musician, and member of Drive by Truckers

Booker is simply one of the tenderest-hearted people I've ever met and I'm so honored to have ever been in his company. This beautiful memoir is a near perfect reflection of the man I would walk a million miles for: engaging, unforgettable, and deeply creative.--SinéadO'Connor

Booker T. is a great producer, a great musician, and a great friend. Those three 'greats' together pretty much let you know how I feel about Booker. He and I worked together on many projects, all were fun-just like this book, which is as joyful to read as Booker's music is to listen to.--Willie Nelson

Booker T. will forever be known as the Booker T. from Booker T. and the MGs. But this book reveals so much more of the man.--Bob Dylan

Booker, we love you and your genius ability to touch people's hearts with your organ, your music, and now your writing.--Narada Michael Walden

I have come to view Booker T and the MGs (the Mixed Group) as one of the backbones of American popular music, and if you listen to how Booker T Jones works that Hammond B3 organ on those classic songs, you realize he is playing his life, note for note. That's how it is in his memoir, Time Is Tight: With every page he strikes a heartfelt chord as he candidly reveals his life before and during his years at Stax Records, an era of racism and segregation that defined the city of Memphis, Tennessee and America. This book brings to light the honesty, grit, and integrity he displayed in his musical brilliance for more than six decades, a soundtrack of pure genius that transcends the human soul. I dare you to put this book down once you start reading it.--AlBell, former owner Stax Records, former President of The Motown Records Group

The contributions by Booker T. Jones to American Popular Music are immeasurable. In Time is Tight, Booker digs deep into his soul, revealing much about the extraordinary music he has made over nearly six decades with artists as diverse as Otis Redding, Sam and Dave, Bill Withers, Bob Dylan, Neil Young, Willie Nelson and, of course, Booker T. and the MG's. In between stories of musical greatness, the readers learns much about Booker's personal life and, in the process, the depth of his humanity. Intelligent and articulate to a fault, Time is Tight is one of the finest autobiographies that I have ever read.--Rob Bowman

Booker T. Jones is an American multi-instrumentalist, songwriter, record producer and arranger. Best known as the frontman of the band Booker T. & the M.G.'s, he has worked with countless award-winning artists of the 20th and 21st centuries, and has earned a Grammy Award for lifetime achievement. Along with the band, he was inducted into the Rock and Roll Hall of Fame in 1993. Jones continues to record and tour international, both as a solo artist and as head of the Booker T's Stax Revue.
If the item details above aren’t accurate or complete, we want to know about it. Report incorrect product info.