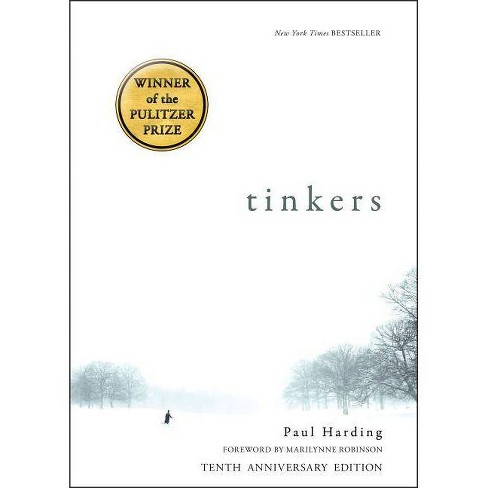 $13.69
MSRP$16.99
0 out of 5 stars with 0 reviews
be the first!be the first! ratings
Shipping
Free standard shipping with RedCard
Help us improve this page

"A powerful celebration of life in which a New England father and son, through suffering and joy, transcend their imprisoning lives and offer new ways of perceiving the world and mortality." --Pulitzer Prize citation

"An exquisite novel . . . told with a voice so keen and beautiful as to leave the reader in a state of excitement produced only by literature, and the best literature at that." --PEN/Robert W. Bingham Prize judges' citation

"In this lyrical novel, the life of a dying man is examined through the smallest moments of time and memory." --American Library Association Notable Book citation

"[Tinkers is a novel] we hear customers hand-selling to other readers in that you've-got-to-read-this voice. The protagonist's deathbed memories of his father are a meditation on life and death, written in impeccably lovely prose. Tinkers is incomparable." --Indie Next List for Reading Groups citation by Cheryl McKeon, Book Passage, San Francisco, CA

"There are few perfect debut American novels. . . . To this list ought to be added Paul Harding's devastating first book, Tinkers. . . . Harding has written a masterpiece." --NPR Best Debut Fiction of the Year citation

"A novel with an old-fashioned meditative quality so perfectly done that it is refreshing to read in a world filled with noises and false excitements. . . . It brings the reader to a closer understanding of his own life than he could have imagined before taking the journey." --Granta Best Books of the Year citation

"This compact, adamantine debut dips in and out of the consciousness of a New England patriarch. . . . In Harding's skillful evocation, Crosby's life, seen from its final moments, becomes a mosaic of memories." --New Yorker

"Tinkers is a poignant exploration of where we may journey when the clock has barely a tick or two left and we really can't go anywhere at all." --Boston Globe

"Few contemporary writers have [Harding's] gift for uniting language and nature through a powerful imagination. Tinkers is a father-son story told with skill, depth and beauty." --Concord Monitor

"The life and death questions Paul Harding raises in Tinkers, as well as the richness of his writing, keep a reader coming back to it. . . . Like Faulkner, he never shies away from describing what seems impossible to put into words." --Dallas Morning News

"Vivid and original. . . . Tinkers [is] going to be around for a long, long time." --Milwaukee Journal Sentinel

"This beautiful novel is sui generis; the most insignificant events . . . radiate fire and light." --Star Tribune

"Stunning. . . . Harding, who apprenticed with his horologist grandfather, uses the clock as a metaphor for the cosmos and its deeper intricacies and mysteries." --Courier-Journal

"This is a book so meticulously assembled that vocabulary choices like 'craquelure' and 'scrieved'--far from seeming pretentious--serve as reminders of how precise and powerful a tool good English can be." --Christian Science Monitor

"Tantalizing. . . . Tinkers takes an uncompromising look at the complex emotional geometry that exists between parents and children." --London Review of Books

"The most captivating exploration of history, time and human consciousness. . . . An expert piece of historical and psychological archaeology, which unpicks the (bewitching) intricacies of ordinary life while also asking the terrifying, unanswerable, yet endlessly fascinating questions that haunt us all." --Guardian

"Among the many triumphs of this novel, Harding enables a reader to look at the world differently." --Telegraph

"Sometimes a novel beguiles from the opening sentence. Paul Harding's seductive Pulitzer-winning debut does precisely that [and] the prism of an entire world emerges. . . . The story and the stories within it flow like water over stones." --Irish Times

"Harding is a first-rate writer, and his fascination with what makes his characters tick recommends him as a philosopher, as well." --Time Out Chicago

"Unique, captivating, and a measure more magical than most other contemporary novels." --Guernica

"A luminous novel . . . that is not about death but instead an investiï¿½gation into what life is all about. . . . The precipice is what Harding is so concentrated on, as though he were holding a magnifying glass up under bright sunlight and setting fire to the page." --Quarterly Conversation

"This excellent debut proves Harding to be a writer of exceptional poise, possessing clear-eyed skill and, like his characters, a steady hand for the finest of details." --Rumpus

"Writing with breathtaking lyricism and tenderness, Harding has created a rare and beautiful novel of spiritual inheritance and acute psychological and metaphysical suspense." --Booklist (starred review)

"Outstanding. . . . The real star is Harding's language, which dazzles whether he's describing the workings of clocks, sensory images of nature, the many engaging side characters who populate the book, or even a short passage on how to build a bird nest. This is an especially gorgeous example of novelistic craftsmanship." --Publishers Weekly (starred review)

"Filled with lovely Whitmanesque descriptions of the natural world, this slim novel gives shape to the extraordinary variety in the thoughts of otherwise ordinary men." --Kirkus Reviews

"A novel that you'll want to savor. . . . I found reading it to be an incredibly moving experience. . . . This book begs to be read aloud." --Nancy Pearl, KUOW.org

"Paul Harding's Tinkers is not just a novel--though it is a brilliant novel. It's an instruction manual on how to look at nearly everything. Harding takes the back off to show you the miraculous ticking of the natural world, the world of clocks, generations of family, an epileptic brain, the human soul. In astounding language sometimes seemingly struck by lightning, sometimes as tight and complicated as clockwork, Harding shows how enormous fiction can be, and how economical. Read this book and marvel." --Elizabeth McCracken, author of Thunderstruck and Bowlaway

"Tinkers is truly remarkable. It achieves and sustains a unique fusion of language and perception. Its fine touch plays over the textured richnesses of very modest lives, evoking again and again a frisson of deep recognition, a sense of primal encounter with the brilliant, elusive world of the senses. It confers on the reader the best privilege fiction can afford, the illusion of ghostly proximity to other human souls." --Marilynne Robinson, author of Gilead and What Are We Doing Here?

"A work of great power and originality. There is a striking freedom of style here, which allows the author to move without any sense of strain or loss of balance from the visionary and ecstatic to the exquisitely precise. The novel is compelling to read, sometimes horrific, and deeply moving because it is woven together into the single quilt of our humanity." --Barry Unsworth, author of Sacred Hunger and The Quality of Mercy