To Kill a Kingdom - by Alexandra Christo 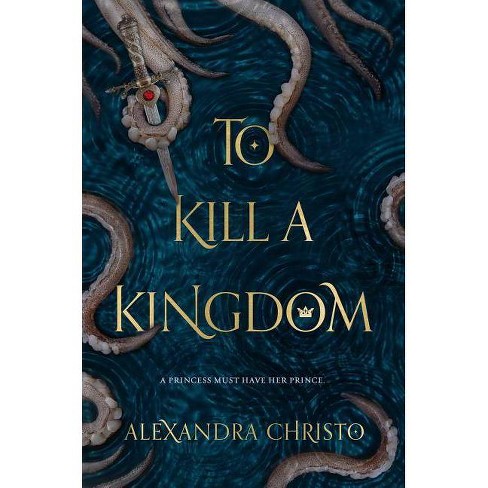 Lira, a famous siren, must prove herself by stealing the heart of the man, a siren-hunting prince who's threatening her race in this action-packed debut.

Lira, a famous siren, must prove herself by stealing the heart of the man, a prince, threatening their race in this dark and action-packed debut. Princess Lira is siren royalty and the most lethal of them all. With the hearts of seventeen princes in her collection, she is revered across the sea. Until a twist of fate forces her to kill one of her own. To punish her daughter, the Sea Queen transforms Lira into the one thing they loathe most--a human. Robbed of her song, Lira has until the winter solstice to deliver Prince Elian's heart to the Sea Queen and or remain a human forever. The ocean is the only place Prince Elian calls home, even though he is heir to the most powerful kingdom in the world. Hunting sirens is more than an unsavory hobby--it's his calling. When he rescues a drowning woman in the ocean, she's more than what she appears. She promises to help him find the key to destroying all of sirenkind for good--But can he trust her? And just how many deals will Elian have to barter to eliminate mankind's greatest enemy? Alexandra Christo's debut is a dark and richly imagined take on The Little Mermaid that will leave readers breathless.

Arrogant and often merciless, Lira and Elian are not totally likable, especially in their careless disregard for life, human or otherwise, but there's an appealing prickliness to their confidence, magnified by their quippy dialogue. As narrators, Lira and Elian have distinct voices, but for all their swagger, both characters are struggling under the expectations of their parents and in their role in war that started long before they were even born. The world building is deft, and the spectacular ending is a happy one for Lira and Elian, but it will leave readers blissfully wanting more.--The Bulletin of the Center for Children's Books

With well-crafted fight scenes and vivid descriptions, Christo has created a world of beauty and monstrosity that will draw readers in.--Publishers Weekly Stellar world building and nonstop action will keep readers hooked on this twisted reimagining of "The Little Mermaid.--Booklist Online Fantasy fans will like the idea of sirens and piratelike princes as the characters who are imaginative and well developed.--School Library Journal

Readers who enjoy dark fairy tales of The Little Mermaid persuasion will sink into this bloody tale with pleasure.--RT Book Reviews

Alexandra Christo decided to write books when she was four and her teacher told her she couldn't be a fairy. She has a BA in Creative Writing and works as a copywriter in London, both of which make her sound more grown up than she feels. When she's not busy making up stories, she can be found buying far too many cushions and organizing food crawls all over the city. Alexandra currently lives in Hertfordshire with an abundance of cacti (because they're the only plants she can keep alive). To Kill a Kingdom is her first novel.
If the item details above aren’t accurate or complete, we want to know about it.

The Final Gambit - (The Inheritance Games) by Jennifer Lynn Barnes

The Wicked King - (Folk of the Air) by Holly Black (Paperback)

Vow of Thieves - (Dance of Thieves) by Mary E Pearson

Princess of Souls - by Alexandra Christo

City of Spells - (Into the Crooked Place) by Alexandra Christo

The Cursed Hunter - (The Stolen Kingdom) by Bethany Atazadeh (Paperback)

For a young audience

3 out of 5 stars
Would not recommend
anonymous - 3 months ago
This story seems to be conceptualized as a dark retelling of The Little Mermaid. I think this is a cool concept, and like the fact that the entire book wasn't reliant on it. This book provides a good adventure for kids 11-14 I'd say. Past that age, I don't think it'd be very interesting. The plot is unbelievably straight forward and the story is very simple. The characters do have distinct personalities, but fall into the "I am nothing but a single personality trait" issue we see with written characters. This in turn made the interactions cringy at times. The banter and playful pushing was really overdone and I eventually dreaded it despite usually loving banter! However, I think this cheesy dialogue would be great for a young audience. I could see this being something I'd have loved at 12, and I even recommended it to my sister who is 13. Overall, I did enjoy the story but it wasn't great. I definitely don't think it'd be worth reading for anyone 18+, but I think it is great for a younger audience, and the darkness of the story will give them a sense that they are reading something more intense and mature, when in reality is juvenile and not too heavy.
1 guest found this review helpful. Did you?

5 out of 5 stars
Would recommend
Alyssa F - 1 year ago
I loved this book! Came in excellent condition and I loved the story! ⭐️⭐️⭐️⭐️⭐️
1 guest found this review helpful. Did you?

it was good i guess

3 out of 5 stars
Would recommend
I could rant for hours - 2 years ago
The book was ok i don’t know I did not like the ending but let’s be honest if you’re looking at this you’ll probably get it anyways
1 guest found this review helpful. Did you?