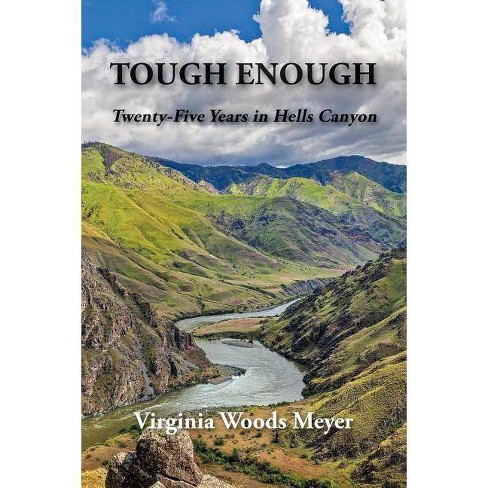 The roar of jet boats, the shouts and calls of fishermen and floaters echo between canyon walls. Is that what Congress anticipated when they allotted funds to purchase, preserve and protect in its natural state this last free-flowing stretch of the Snake River to establish the Hells Canyon National Recreation Area?

Many books have been written, many stories told about life in Hells Canyon during the years prior to World War II. Tough Enough: Twenty-five Years in Hells Canyon updates that accounting bringing to life the story of the Lem Wilson family who moved to the Canyon in 1951. On the remote Oregon side of the Snake River the Wilsons developed a large sheep ranch expecting to spend the rest of life ranching there with their three sons. Twenty-five years later they were gone--ownership of land and home surrendered to the Forest Service, when for the first time in United States history the Federal Government chose to employ the law of eminent domain to take privately owned agricultural land for public recreational use.

Based on anecdotal memories recorded by Doris Wilson, Tough Enough portrays a haunting tale of this one family's experiences living and ranching on the remote Oregon side of the Snake River where roads, electricity and other modern conveniences did not exist. This is the their story, told from their point of view as they experienced the changing cultural environmental, political and economic forces that swept through the region following World War II. Some may agree with their interpretation, others may not, yet the Wilson story is relevant today as it presents an important and fascinating tale as decision makers are called to respond to similar issues in our nation today.

Written as creative non-fiction Tough Enough tells the Wilsons' story in three ten-year segments. Setting the stage, the first part of the book focuses on the domestic scene as Doris partners with her husband to develop the large sheep ranch that, for years, has been Lem's life-long dream.

Section two reaches beyond the household setting, as the 1960s bring threatening winds of change. New governmental rules and regulations impact the ranchers' way of earning a living. A new vocabulary descends on the region introducing words like ecology and environment.

The years of the great depression have passed, and consumers with newfound money freely spend, purchasing expensive new "toys" and daring to challenge the turbulent rapids of the Snake River. Sportsmen invade the canyon claiming the river for their own personal playground.

In the third section, Lem and Doris reluctantly acknowledge and have to deal with the inevitable outcome of these changing times. Ultimately they decide to set aside 28.5 acres of their land to be sold for use as small individually owned vacation home-sites and begin the subdivision process. Congress, backed by environmental enthusiasts wanting to see Hells Canyon held in its current wild and natural state, orders Forest Service officials to include recreational use when making management decisions for federally owned public land.

Seeking to acquire ownership of the Wilson's and other privately owned land in Hells Canyon, Forest Service officials employ the law of eminent domain to take the ranchers land. In response the Wilsons and two other landowners file suit against the government seeking more compensation for their land. Tough Enough tells the story of this difficult time and the eventual outcome.