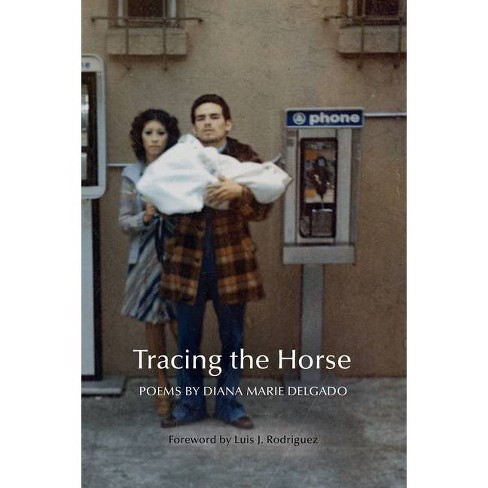 $12.89
MSRP$17.00
no reviews yet
be the first!be the first! ratings
Shipping
Free standard shipping with RedCard
Loading, please wait...
Help us improve this page

"With vigorous wit and clarity, Diana Marie Delgado writes scenes of growing up in the San Gabriel Valley of Southern California. The poet traces the rich voice of identity through the turbulent passions of childhood and adolescence and their casually spoken, pungent lines that don't ever go away. Here, amid the myriad complications of the first phase of life, addiction and incarceration of relatives are but details, not destinies. These starkly succinct poems and prose poems map a powerful constellation of becoming. As she writes in another poem from this collection -- 'my journey is to forgive/everything that's happened.'"
--Naomi Shihab Nye for The New York Times Magazine

" Within Delgado's poetics, forgiveness stems from the creation of beauty. [She] provocatively challenges the boundaries between interior and exterior, self and other, individual and collective. Delgado's vulnerable, deep exploration of the self is memorable."
--Publishers Weekly

"In her debut poetry collection, Tracing the Horse, Diana Marie Delgado uses taut language and controlled recursion to render the life of her young narrator as she navigates the boundaries of her world in La Puente, a barrio in Los Angeles's San Gabriel Valley. The poems are ethereally beautiful--razor-sharp and dreamlike at once--as they explore the heavy realities and expectations of family, poverty, drugs, crime, and sexual exploitation. The poems gallop off from there, each title blooming into a memory, a whisper, a haunting--a horse in the night, flashing by lightning-fast. And you'll read them lightning-fast, too, hungry for the magic of Delgado's words."
--GUERNICA

"Delgado's first full-length poetry collection blooms in the barrio of La Puente in the San Gabriel Valley, and centers around a young woman and her family beset by addiction, incarceration, and other forms of violence. In one poem, the speaker wants to 'understand why the light in my dad's body / after the needle's tucked in is orange / on a river so silver I can barely see him.' In another poem that seeks to decipher her family's troubled legend, the speaker considers the role her mother plays: 'Maybe Mom's the horse / because aren't horses beautiful, / can't they kill a man if spooked?' A quiet sensuality underscores the domestic unrest, and Delgado's understated lyrics read like snippets from a private conversation with an unknown interlocutor, one who shares her intimacy with both sides of the law: 'California has a lot of prisons, all with beautiful names.' An introspective carousel of electric, lightning lyrics."
--Booklist