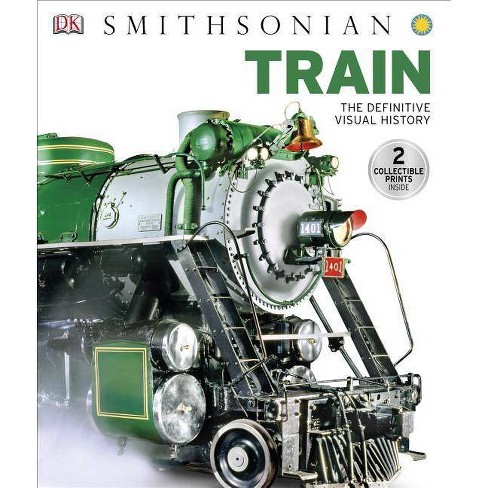 Featuring amazing images of trains, virtual tours of engines, and profiles of key innovators, designers, and engineers, Train: The Definitive Visual History traces the history of the railroad and the role of trains, from the first steam engines to today's high speed bullet trains.

This glorious visual celebration of train travel keeps you on the right track with stop-offs at the most important and incredible rail routes from all over the world.

Your first stop in The Train Book is the groundbreaking steam locomotives of the 19th century and your final destination is the high-speed bullet trains of today. From the Union-Pacific Railroad to the Trans-Siberian Railway, you'll cross the continents to experience epic journeys and staggering scenery. You'll pick a seat on the most iconic locomotives, including the Orient Express, the Blue Train, and the Eurostar. You can also inspect the engines of famous British trains, such as Rocket, Mallard, and Javelin, and international trains, such as India's Palace on Wheels and America's Thatcher Perkins. You'll meet the true pioneers of train and track, including "Father of the Railways" George Stephenson, engineering legend Isambard Kingdom Brunel, and Métro maestro Fulgence Bienvenüe. For train-spotters and transport enthusiasts everywhere, this is your trip of a lifetime.

DK was founded in London in 1974 and is now the world's leading illustrated reference publisher and part of Penguin Random House, formed on July 1, 2013. DK publishes highly visual, photographic nonfiction for adults and children. DK produces content for consumers in over 87 countries and in 62 languages, with offices in Delhi, London, Melbourne, Munich, New York, and Toronto. DK's aim is to inform, enrich, and entertain readers of all ages, and everything DK publishes, whether print or digital, embodies the unique DK design approach. DK brings unrivalled clarity to a wide range of topics with a unique combination of words and pictures, put together to spectacular effect. We have a reputation for innovation in design for both print and digital products. Our adult range spans travel, including the award-winning DK Eyewitness Travel Guides, history, science, nature, sport, gardening, cookery, and parenting. DK's extensive children's list showcases a fantastic store of information for children, toddlers, and babies. DK covers everything from animals and the human body, to homework help and craft activities, together with an impressive list of licensing titles, including the bestselling LEGO(R) books. DK acts as the parent company for Alpha Books, publisher of the Idiot's Guides series and Prima Games, video gaming publishers, as well as the award-winning travel publisher, Rough Guides.
If the item details above aren’t accurate or complete, we want to know about it. Report incorrect product info.