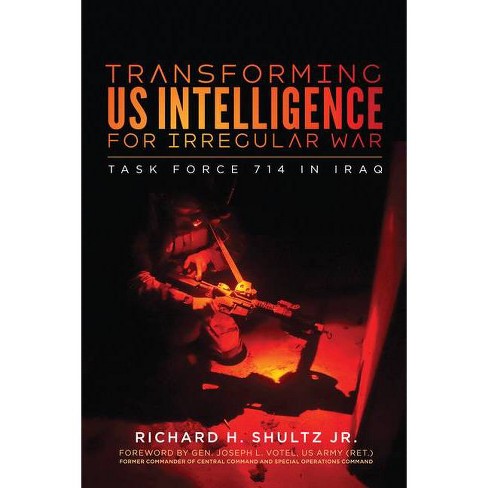 $34.99
new at target¬
no reviews yet
be the first!be the first! ratings
Release Date: coming soon!
Preorder for
Edit zip
Ships by release date with free standard shipping using RedCard
Help us improve this page

"In this masterful history, Shultz delivers an illuminating and fascinating account of how America's warriors and intelligence professionals fought terrorists and insurgents that were perpetuating a destructive civil war in Iraq and across the Middle East."--Lt. Gen. H.R. McMaster, USA (Ret.), author of Dereliction of Duty: Lyndon Johnson, Robert McNamara, the Joint Chiefs of Staff, and the Lies that Led to Vietnam

When the Joint Special Operations Command deployed Task Force 714 to Iraq in 2003, it faced an adversary unlike any it had encountered before. Al-Qaeda in Iraq (AQI) consisted of multiple, independent networks that applied Information Age technologies to wage war across a vast landscape. To meet this unique threat, TF 714 developed the intelligence capacity to operate inside those networks and, in the words of commander Gen. Stanley McChrystal, USA (Ret.), "claw the guts out of AQI."

In Transforming US Intelligence for Irregular War, Richard H. Shultz Jr. analyzes the role of intelligence in combatting nonstate militants and revisits this moment of innovation during the Iraq War, showing how the defense and intelligence communities can adapt to new and evolving foes. Shultz tells the story of how TF 714 partnered with US intelligence agencies to dismantle AQI's secret networks by eliminating many of its key leaders. He also reveals how TF 714 altered its methods and practices of intelligence collection, intelligence analysis, and covert paramilitary operations to suppress AQI's growing insurgency and, ultimately, to destroy its networked infrastructure.

TF 714 remains an exemplar of successful organizational learning and adaptation in the midst of modern warfare. By examining its innovations, Shultz makes a compelling case for intelligence leading the way in future campaigns against nonstate armed groups.

Richard H. Shultz Jr. is the Lee E. Dirks Professor of International Politics and the director of the International Security Studies Program at the Fletcher School of Law and Diplomacy at Tufts University. He is the author of several books, including The Marines Take Anbar: The Four-Year Fight Against Al Qaeda and, with Andrea J. Dew, Insurgents, Terrorists, and Militias: The Warriors of Contemporary Combat.