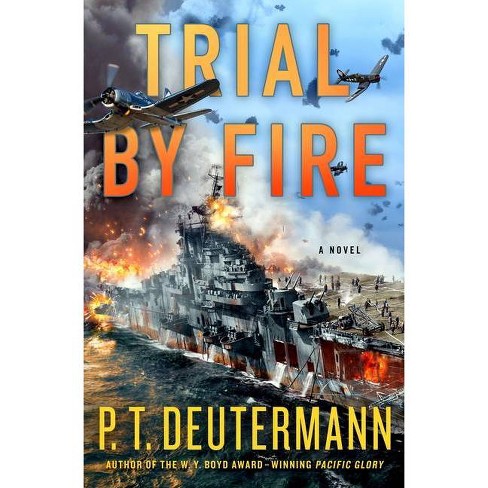 "Based on a true story--P.T. Deutermann's Trial by Fire is a dramatic WWII novel of attack, survival, and triumph on board an aircraft carrier in the Pacific."--Publisher's description.

Based on a true story--P. T. Deutermann's Trial by Fire is a dramatic WWII novel of attack, survival, and triumph on board an aircraft carrier in the Pacific.

It's March 1945 and the war in the Pacific is approaching its apocalyptic climax. The largest wartime armada ever assembled, Task Force 58, is closing in on Okinawa; once taken, it will finally put American B-29 bombers in comfortable range of the home islands of Japan--and victory.

At the heart of the fleet are 14 Essex-class aircraft carriers, including the USS Franklin, known as Big Ben--a 27,000-ton behemoth, home to 3,600 crewmen and 100 aircraft. Just after dawn, while crewmen prepare for battle, a single Japanese Yokosuka D4Y bomber breaks through the clouds and drops a 500-pound semi-armor piercing bomb on Big Ben. The bomb rips through the wooden flight deck before exploding on the hangar deck, amidst two dozen fully fueled and armed fighter-bombers. The resulting explosion engulfs both the hangar deck and all the planes spotted on the flight deck. Bombs cook off and rockets howl in all directions, both on the flight deck and down in the hangar bays. Hundreds of men are forced to leap into the sea to escape the rivers of burning aviation gasoline, leaving the captain with only one third of his crew, of whom there are more dead, wounded and trapped men left onboard than able-bodied sailors.

Trial By Fire is the gripping novelization of how, against all odds, the sailors of the Franklin were able to save their ship, after 3 agonizing days of battling the flames that ultimately claimed the lives of 832 men and injured 300 more. Readers will be astounded and humbled by the heroic actions of a few extraordinarily brave sailors in the face of unending catastrophe.

Heroism abounds as Deutermann skillfully brings moments like the rescue of 300 men trapped below decks to life, while also vividly conveying the sensations of pervading death...fans of naval history will be enthralled.
-Publishers Weekly

P.T. DEUTERMANN is the noted author of many novels based on his experiences as a senior staff officer in Washington and at sea as a Navy Captain, and later, Commodore. His WWII works include Pacific Glory, which won the W.Y. Boyd Award for Excellence in Military Fiction, The Hooligans, The Nugget, Sentinels of Fire, The Commodore, Ghosts of Bungo Suido, and The Iceman. He lives with his wife of 50 years in North Carolina
If the item details above aren’t accurate or complete, we want to know about it. Report incorrect product info.