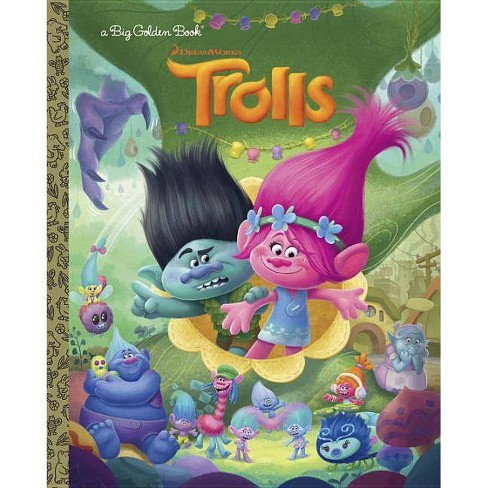 When an old enemy discovers Troll Village, Poppy, the troll princess, and her reluctant partner Branch go on a hair-raising adventure to save their people.

TROLLS hits theaters everywhere on November 4, 2016! DreamWorks Animation's TROLLS is an irreverent comedy extravaganza with incredible music! From the genius creators of SHREK, TROLLS stars Poppy, the optimistic leader of the Trolls, and her polar opposite, Branch.
Together, this unlikely pair of Trolls must embark on an adventure that takes them far beyond the only world they've ever known. Boys and girls ages 3 to 7 will love this beautifully illustrated hardcover Big Golden Book that follows the adventures of Poppy and Branch!

In 1942, the launch of Little Golden Books revolutionized children's book publishing by making high-quality picture books available at affordable prices. More than 60 years later, many of the original Golden Book titles are still wildly popular, with The Poky Little Puppy topping the list of ten bestselling children's books of all time. Golden Books' backlist is teeming with classics such as Dorothy Kunhardt's Pat the Bunny, and features the stories and artwork of children's book legends Mary Blair, Margaret Wise Brown, Richard Scarry, Eloise Wilkins, Garth Williams, and many more. Today, the Golden Books imprint includes an array of storybooks, novelty books, and coloring and activity books featuring all of the most popular licenses, including Disney, Nickelodeon, Barbie, Thomas & Friends, The Cat in the Hat, Sesame Street, Marvel Super Heroes, and DC Super Friends. Golden Books continues to reissue the best of its backlist in a variety of formats, including ebooks and apps, as well as bringing out brand-new books in these evolving new formats. Alan Batson is a British cartoonist and illustrator. His works include Everything I Need to Know I Learned from a Star Wars Little Golden Book, Everything That Glitters is Guy!, and Baby McStuffins. Fabio Laguna is an illustrator. His works include Frosty the Snowman, Belle is My Babysitter, and A Cake to Bake.
If the item details above aren’t accurate or complete, we want to know about it. Report incorrect product info.