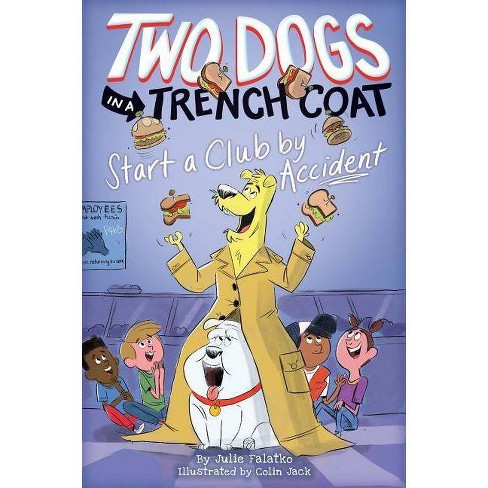 In the follow-up to "Two Dogs in a Trench Coat Go to School, " Sassy and Waldo love school so much that sometimes they stay after the day is over. And that's how they started a club by accident. Illustrations.

Good dogs Sassy and Waldo start their own after school club and they don't even realize it!Sassy and Waldo love school!They get to wear a trench coat and everyone thinks they're a new student named Salty.Except Stewart. He knows the truth.But then Stewart has to stay after school for a club.Sassy and Waldo know that a club is a sandwich. But it's not that kind of club.Sassy and Waldo go to the best place to wait for Stewart in the empty school: the cafeteria! Snacks! Running! Places to nap!Their classmates find out what Salty is doing there and they want in on the club.Only it's not the sandwich kind.

Praise for Two Dogs in a Trench Coat Go to School: * With plenty of comical reinforcement from Jack's freewheeling sketches, Falatko spins this promising premise into a hilarious romp. Booklist, starred reviewA series that will keep your 7-year-old laughing. -- TODAY

Colin Jack has illustrated several books for children, including the Galaxy Zack series, Toads on Toast, and If You Happen to Have a Dinosaur. He also works as a story artist and character designer at DreamWorks Studios. He lives in California with his wife and two kids.

Julie Falatko is the author of the Snappsy the Alligator series, illustrated by Tim Miller; No Boring Stories, illustrated by Charles Santoso; and The Great Indoors, illustrated by Ruth Chan. Julie lives in Maine with her family, including her two dogs, and loves to make everyone (except the dogs) go to museums. To learn more about Julie, please visit juliefalatko.com.
If the item details above aren’t accurate or complete, we want to know about it. Report incorrect product info.