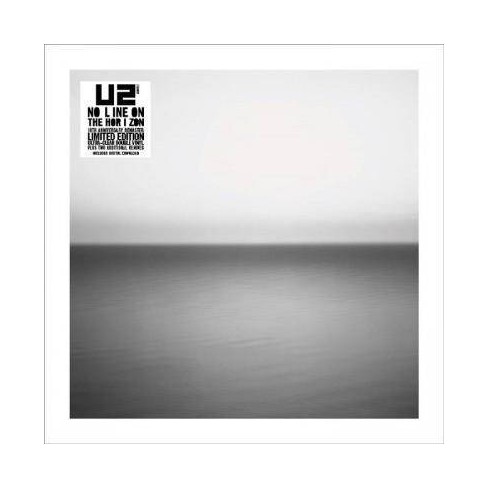 $31.49
MSRP$49.96
no reviews yet
be the first!be the first! ratings
Shipping
Not available
Help us improve this page

Rolling Stone (p.72) - 5 stars out of 5 -- "The Edge takes one of his few extended guitar solos at the end of 'Unknown Caller,' a straightforward, elegiac break with a worn, notched edge to his treble tone....'Cedars of Lebanon' ends the album much as 'The Wanderer' did on ZOOROPA, a triumph of bare minimums..."
Spin (p.73) - "U2 still inspire flashes of elation, awe, and yes, hope like no other rock band....The title-track opener masses the Edge's guitar and synth tracks into a dense whir and swirl amid gurning polyrhythms..."
Spin (p.29) - Ranked #32 in Spin's "40 Best Albums Of 2009" -- "NO LINE is entirely convincing, with sounds, tones, and textures that wouldn't have sounded out of place in 1983..."
Entertainment Weekly (pp.70-71) - "NO LINE ON THE HORIZOON is an eclectic and electrifying winner, one that speaks to the zeitgeist the way only U2 can and dare do....The record's instant classic is its penultimate track, 'Breathe,' a stomping, snarling rumination..." -- Grade: A-
Uncut - 4 stars out of 5 -- "The title track crashes in like a wave over the bows, washes of keyboards retreating to reveal a growling guitar riff..."
Down Beat (p.58) - 4 stars out of 5 -- "Purveyors of anthemic rock at its finest, arguably the world's greatest pop band offers more passion under the guidance of producers Brian Eno and Daniel Lanois..."
Q (Magazine) (pp.94-95) - 5 stars out of 5 -- "The first part of NO LINE ON THE HORIZON contains the U2 of wide-open spaces, of sweeping mountain valleys, and of Edge's signature chiming guitar lines....The best U2 album since ACHTUNG BABY. With time, it may prove to be better still."
Mojo (Publisher) (p.96) - 4 stars out of 5 -- "The result is a collage of several kinds of classic U2 albums, one that has the beauty of their panoramic '80s Eno/Lanois recordings plus the synthetic experimentation and dalliance with pop merriment which revolutionized the band's modus operandi from ACHTUNG BABY onwards."
Blender (Magazine) (p.58) - 5 stars out of 5 -- "'Moment of Surrender' is the high point -- seven minutes of Bono in gospel mode, lost in the late-night city, questing for salvation and finding it in Adam Clayton's bass. The Edge fleshes out the yearning with some piercing crazy-diamond guitar."
Record Collector (magazine) (p.102) - 4 stars out of 5 -- "Smart one-liners pepper the album....Musically eclectic at every turn, the title track is swathed in the staccato guitar figures Franz Ferdinand have recently monopolised..."
Clash (Magazine) (p.106) - "Drenched in The Edge's sky-scraping guitar solos, Bono's operatic vocals, and Eno and Lanois' ambient, textured production effects....A record that is trademark U2 -- playful, soulful, stadium-slaying and decidedly heavy at times."
If the item details above aren’t accurate or complete, we want to know about it. Report incorrect product info.