Ultimate Success Featuring: Think and Grow Rich, as a Man Thinketh, and the Power of Your Subconscious 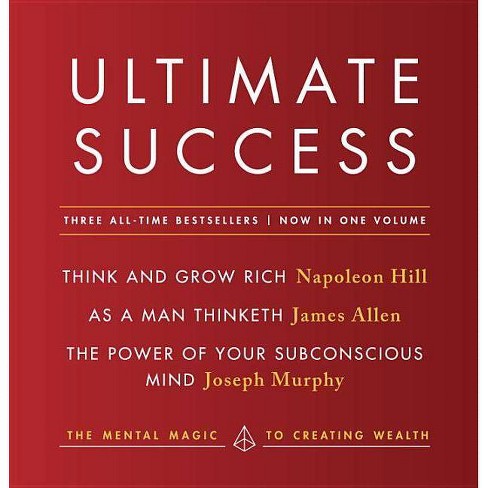 $12.29
MSRP$15.00
no reviews yet
be the first!be the first! ratings
Shipping
Free standard shipping with RedCard
Help us improve this page

Napoleon Hill was born in 1883 in Virginia and had a long and successful career as a lecturer, author, and consultant to business leaders. His Think and Grow Rich is the all-time bestseller in its field, having sold millions of copies worldwide, and setting the standard for today's motivational thinking. He died in 1970. James Allen was born in Leicester, England, in 1864. He took his first job at age 15 to support his family after his father was murdered while looking for work in America. Allen was employed as a factory knitter and a private secretary until the early twentieth century, when he became known for his motivational writing. His 1903 work As a Man Thinketh earned him worldwide fame as a prophet of inspirational thinking and influenced a who's who of self-help writers, including Napoleon Hill, Dale Carnegie, and Norman Vincent Peale. Allen died at age 47 in 1912. A native of Ireland who resettled in America, Joseph Murphy, Ph.D., D.D., (1898-1981) was a prolific and widely admired New Thought minister and writer, best known for his motivational classic The Power of Your Subconscious Mind, an international bestseller since it first appeared onto the self-help scene in 1963. A popular speaker, Murphy lectured on both American coasts and in Europe, Asia, and South Africa. He wrote widely and his many books and pamphlets on the auto-suggestive and metaphysical faculties of the human mind have entered multiple editions, including the renowed How to Attract Money. Murphy is considered one of the pioneering voices of affirmative-thinking philosophy.
If the item details above aren’t accurate or complete, we want to know about it. Report incorrect product info.